The Belt and Road Initiative A New Zealand Appraisal

<< Investing in Guangdong Easier for Foreign Firms after New Incentives Announced China’s City Clusters: The Plan to Transform the Country into 19 Super-regions >> 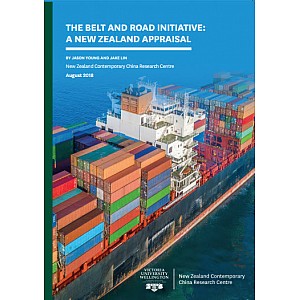 The Belt and Road Initiative (BRI) presents a unique challenge of responding to a Chinese led initiative that could be a platform for furthering regional development and New Zealand’s economic relations with China but one that remains ambiguous, has divided international opinion and that potentially runs counter to some of New Zealand’s engagement principles.

In its simplest form, the Chinese Government presents BRI as an opportunity to form bilateral partnerships with China to promote economic connectivity and development and to deepen economic, cultural and political relations with China and the surrounding region. Within Chinese academia, the initiative is considered an economic strategy to deal with Chinese overcapacity and limited consumption and to promote regional development and connectivity whilst exporting what many Chinese scholars consider a successful economic growth model. China’s international relations community views BRI as a geopolitical strategy to avoid direct confrontation with its main strategic competitor—the U.S.—and to increase Chinese influence in the surrounding region while increasing China’s contribution of public goods, role in the regional economy and voice in world affairs. BRI is considered the external expression of the ‘Chinese dream’ and the ‘great rejuvenation’ of the Chinese nation.

International reaction to BRI has been mixed. Many countries, especially developing economies, have entered into projects with China to pursue development opportunities and international organisations like the United Nations Development Programme have viewed BRI as an opportunity to work with China to push forward international development. Major powers from the European Union to the United States have responded more coolly raising concerns of potentially destabilising indebtedness and a lack of transparent and inclusive governance structures around BRI projects. Academics have questioned China’s geostrategic ambition, the bilateral nature of the initiative, the effectiveness of the projects and the impact an alternative model of development could have on efforts to promote development in conjunction with the rule of law, good governance, democracy, accountability and transparency. Our closest neighbour, Australia, publically rejected an invitation to join BRI at the national level and is engaged in a fierce debate about their involvement.

Following a pattern of seeking innovative areas of cooperation with China, New Zealand became one of the first Western economies to sign a Memorandum of Arrangement (MoA) on BRI in March 2017. New Zealand was also one of the first Western economies to sign on to the Asia Infrastructure Investment Bank. The BRI MoA focussed attention in the 18 months following its signing on discussing how New Zealand could participate. A range of views have been expressed in New Zealand business and academic circles, including via a report commissioned by the New Zealand China Council which outlines a series of areas of potential economic engagement ranging from creative industries to becoming a conduit to South America. Discussion of the BRI in the South Pacific has also intensified with Fiji, Papua New Guinea, Samoa and Tonga all taking an interest in working with China within the BRI framework. This, along with a general stepping up of China’s diplomatic and economic engagement in the Pacific and the addition of the concept of ‘Blue Passages’ has added an important regional dimension to the BRI discussion in New Zealand.

More recently, questions have been raised as to how to assess the value of potential participation in BRI and whether there are potential pitfalls for New Zealand engagement in this initiative. Such questions flow from the international response to BRI, an invigorated focus on a broad set of principles of international engagement, increasing uncertainty in the international rules based trading system and the intensification of U.S.-China strategic rivalry.

For New Zealand, the question of how to engage with BRI should be based on an assessment of our national interest, its impact on important partnerships, including China, and the norms we seek to promote internationally. The report recommends limited but committed participation in areas of mutual interest and that this participation is based on well-considered and non-exclusive principles, namely the principles New Zealand applies to engagement with all international partners. Participation should accord with the rules and norms of the international trading system and projects should be open and non-discriminatory.

More specifically, potential New Zealand projects should seek high standards of governance and transparency. Any projects New Zealand participates in should adhere to the rule of law and be subject to due diligence in order to meet international standards of sustainable development, local participation, labour contracting and environmental protection. New Zealand should encourage cross partnering with other BRI countries to avoid the emergence of a narrow ‘hub and spoke’ system and promote the development of multilateral institutions for appraising and governing resources under the broader BRI framework, including dispute resolution mechanisms. New Zealand should seek to understand and take care with BRI language and the use of concepts associated with the initiative. It should be attentive to BRI projects that involve state resources and those that involve the private sector and seek appropriate New Zealand partners. As the Pacific emerges as an area of BRI activity, New Zealand should seek increased cooperation with China in areas of mutual interest and complementary skill sets. We should increase high-level and academic dialogue between China, New Zealand and the Pacific to improve understanding, coordination and feedback and to ensure BRI projects in the region are consistent with regional priorities and principles.

Bilaterally, any New Zealand participation in BRI projects should build on the many cooperation agreements already signed with China, including the 2008 FTA. The New Zealand Government should review any BRI projects it enters into regularly and maintain good communication with China and other partners. These agreements should be open and transparent. Such limited and contained BRI engagement could test the water, and set useful precedents as one of the first liberal democracies and advanced economies to engage in the initiative.

In short, this report acknowledges the opportunities and the complexities of engaging China under its BRI framework and suggests New Zealand does due diligence and engages in accordance with a set of clearly signalled principles in order to ensure engagement with China meets the expectations of both countries.

<< Strategy  < Investing in Guangdong Easier for Foreign Firms after New Incentives Announced | China’s City Clusters: The Plan to Transform the Country into 19 Super-regions >