How China’s best performing brands localise for the China market

<< Beijing Announces Visa and FDI Incentives to Attract Foreign Talent China Work Permits: Are You an A, B, or C Tier Talent? >> 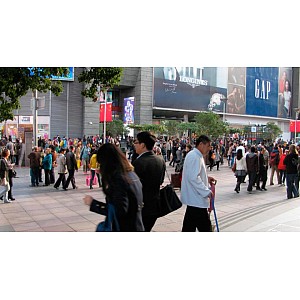 In recent years ‘localisation’ has been one of the buzzwords for foreign brands entering China. Mark Tanner explains how true localisation is one way brands can ensure they are still competitive.

Out of every 100 people you pass on the average street in China, 12 of them will be obese. Yet if you find yourself in Beijing, that number is 26. On top of that they’ll be 2-3 inches taller than the folk you’d meet in Guangzhou. When you sit down to eat at a restaurant with distinctly local tastes you may overhear them talking about last night’s TV show, watched by tens of millions around the region which southerners think downright strange and unwatchable. The starkly different climate and levels of pollution flowing through the streets will affect everything from their skincare preferences to what they do for fun.

Over the past few years ‘localisation’ has been one of the buzzwords for foreign brands entering China. Yet despite its diverse variables between regions and city tiers, most brands’ localisation lumps China into one large homogenous market.

China’s cities are enormous markets in themselves. Shanghai’s GDP is close to Thailand’s in value and its population is greater than Australia’s. Most brands localise specifically for either of those markets to compete. There are 112 Chinese cities with more people than San Francisco, and a dozen cities in China with a GDP of more than a trillion RMB ($147.5 billion USD).

The size of the China prize has seen brands from every corner of the globe courting Chinese consumers alongside increasingly slick domestic brands. An average of 160 new products hit the shelves every day in China, each vying for mindshare of an ever-more indifferent consumer, contributing to the most contested market on the planet.

With such fierce competition, the best performing brands are becoming focused on much more targeted messaging, positioning, channels and even product development.

One of China Skinny’s clients, Intercontinental Hotels Group, is a good example to watch.  They have opened 300 hotels in China and are planning around 240 more in the next 3-5 years. “In such a saturated market, gone are the days of ‘standards’ or ‘model’ hotel restaurants,” says Ronald Yang, IHG’s Director of Restaurants & Bars and Concepts & Design, Greater China. “A lot of the food and beverage development work that we’ve been doing is relating to ‘fitting’ each market where customer perception of hotel dining and the average - or intended - spend is a key to success.”

Whilst not every brand may customize to the level of IHG, there are some considerations that they should take into account:

Messaging and Positioning
Localising advertising with shots of the Pearl Tower for Shanghainese, or the Forbidden City in Beijing can show some love to the locals, but messaging cues should be much more sophisticated and not hinged on old clichés.  Numerous research projects China Skinny has done found notably different messaging resonates with consumers in different regions.

In Beijing, for example, family bonding with nationalistic undertones resonate where men are more macho.  In Shanghai men sway towards the metrosexual and Shanghainese in general relate to more creative, aspirational and international positioning. More functional messaging sits well down in Guangzhou and Shenzhen, however the two metropolis’ remain different in many ways.  Guangzhou is an old city where around 80% are native Cantonese speakers living close to families.  A 30-minute train ride to Shenzhen sees a town of migrants with Mandarin the common language. Sophistication and preferences usually change with city tier and it can be worthwhile tweaking messaging and positioning for main target cities, regions and clusters.

A New Take on Traditional Promotional Channels
Localising TV, radio and newspaper commercials is often a quick win to make local consumers feel a little more connected to your brand, particularly in lower tier cities which are not as used to attention from foreign brands.

Yet the less obvious channels are often those that need the most thought.  In-store promotions and sampling are a popular strategy in China, particularly for imported brands introducing less familiar products that warrant trial.  For a start, retail in China is very fragmented regionally, so brands may need to follow different sets of guidelines in different chains.  In addition, the effectiveness of such promotions varies dramatically between cities.  38% of Shenzhen consumers consider in store promoters to be credible sources of information for food and beverage versus 12% in Nanjing, according to McKinsey research in 2015.

In-store promotions regularly have contests to draw shoppers, with brands often offering overseas trips to reinforce provenance.  Yet our research has found the motivations for holidays can be quite different from one city to another, providing another opportunity to localise.

Digital marketing
Many brands have highlighted online channels such as ecommerce, social media and websites as a way of reaching disparate geographies.  Whilst this is true to a point, smart brands know that the return on digital initiatives can be improved with localisation and personalisation, particularly with the rise of localised O2O (Online to Offline).

“O2O provides an invaluable opportunity to both cater to Chinese consumers’ increasing desire for experiences and drive your awareness in the online space. The more unique and localised the experience, the greater engagement you will see”, notes China Skinny’s marketing manager Andrew Atkinson.

WeChat allows unique QR codes for different locations allowing marketers to segment fans, enabling localised messages to be sent.  Its advertising has an increasingly complex set of variables including city or province.  Similarly with Baidu and other Chinese search engines, advertising messages can be localised and directed to city-specific landing pages.

Alibaba recently introduced personalised stores allowing vendors to tailor features and listings for users by their location, among other criteria.

People talk of China akin to Europe in its diversity, yet in the same breath deliver a homogenous country-wide strategy. China is becoming more contested by the day, and true localisation is one way brands can ensure they are still competitive.

Mark Tanner is managing director of China Skinny - a full-service marketing, research and online agency based in Shanghai. www.chinaskinny.com
This article was originally published at Forbes.com.

<< Strategy  < Beijing Announces Visa and FDI Incentives to Attract Foreign Talent | China Work Permits: Are You an A, B, or C Tier Talent? >