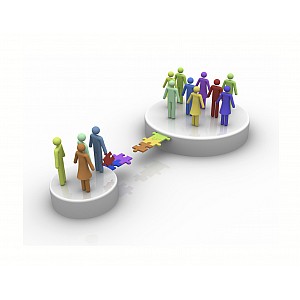 Understanding the complexities and dramatic changes shaping life in modern China is crucial for New Zealanders wanting to do business there, according to lecturers from Massey University’s Chinese language programme.

Dr Liangni Sally Liu and Dr Michael Li, both Chinese-born migrants who have been here 14 years and 12 years respectively, say understanding contemporary Chinese business culture, society and its new directions is as important as language learning for successful communication and business outcomes.

China’s increasing influence in the Pacific and globally is one of the motivations for a special course they have designed for New Zealanders who intend to do business with China. A key example is the launch of the Asian Infrastructure Investment Bank (AIIB), initiated and designed to provide infrastructure development to the Asia-Pacific region. New Zealand joined as a founding member state this January, the 24th nation to do so.

“Because of its geo-location, New Zealand is going to be engaging a lot more with China in the future,” says Dr Liu. “China is going to play a more important role in shaping our economy. It’s very different doing business in China – so there’s a great need for more understanding of how things work there.”

Concepts such as guanxi – roughly translated as ‘relationships resulting in favours, exchanges and connections’ – are vital for foreigners entering the Chinese business world, Dr Liu says.

The new course, launching at Massey’s Auckland campus in Albany in July, includes sessions on political leadership; China’s economic transformation since the late 1980s; the influence of international accounting practices on the Chinese accounting profession; the flaws and strengths of its fiscal and legal institutions; reforms in language and writing under the concept of “one state, one people, one language”; Chinese immigration patterns (globally and to New Zealand); and the multi-faceted social changes affecting income gaps, ageing and aged care, migrant workers, housing, food safety and environmental pollution.

“We want to help students and business people develop a nuanced view when analysing China’s social problems and its relevant historical forces that have contributed to these problems,” she says.

As well as including some basic Chinese business lingo, the new course will draw on expertise from a raft of guest lecturers to talk on specialist topics, such as science and technology development, the role of religion, and sexual rights in China.

Language lecturer Dr Li will explore the degree and rate of Chinese language change in the era of social media and information technology. “We’ll be looking at how the young, educated Chinese netizens construct their modern identities through the use of internet language, and how the hierarchy of class and status are reflected in this seemingly democratic internet community,” he says.

As well as for students, the course is available as a one-off interest paper for teachers, policy makers, business people and cultural ambassadors, whether engaged with Chinese people in New Zealand, in China, or elsewhere.

According to Statistics New Zealand’s 2013 census, there are 171,411 people of Chinese ethnicity, or 4.3 per cent of the total population, in New Zealand. Of these, nearly 70 per cent live in Auckland.

Chinese is one of several language programmes offered through the School of Humanities, along with Japanese, French and Spanish. This programme offers comprehensive Chinese language papers from the beginning level to advanced level.