Heaven on Earth in Hangzhou 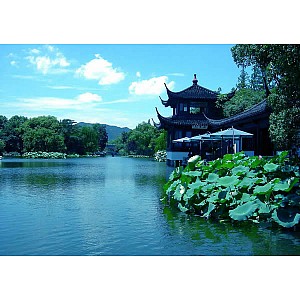 One of my favourite trips last year was the short one day visit to Hangzhou, an up and coming industry powerhouse hub in China and often known for its beauty and charms. Located in southeast China in Zhejiang province, with a population of around 8.8million, Hangzhou is the provincial capital and as such, an important hub for economics, politics and culture.

Hangzhou is a diverse and scenic city. By day, one can appreciate its diversity, from tourists and locals strolling and exercising around the iconic West Lake to the hustle and bustle of the economic and technology development zones. Hangzhou’s reputation and place in its country is illustrated by a very well-known Chinese saying, “上有天堂，下有苏杭” meaning “Heaven above, Suzhou and Hangzhou below” or, in other words, that Hangzhou (and the nearby city Suzhou) are described as “heaven on earth”.

Hangzhou is a one hour train ride Southwest from Shanghai and its location positions it as an important core city in the Yangtze River Delta. In fact, Hangzhou is home to the largest number of China’s top private enterprises including Alibaba Group (the e-commerce giant which owns C2C site, Taobao.com; B2B site, Alibaba.com, B2C site, Tmall.com). Hangzhou has also seen fast growth in other new industries including IT, heavy equipment, automotive, electrical appliances, electronics, chemicals, telecommunication and medicine. Interestingly, over 90% of Hangzhou’s GDP is made up of private enterprise.

China’s wealthiest man, Zong Qinghou is Chairman of the food and beverage conglomerate, Hangzhou Wahaha Group whose headquarters are also based in Hangzhou. Wahaha plans on building 100 malls around China in the next 3-5 years and is considering raising funds through an IPO. Wahaha manufactures a variety of products from bottled water to baby formula and in 2012 it generated $10.3billion in revenue. It currently has only one shopping centre, the Waow Plaza, based in Hangzhou which sells high-end products ranging from European furniture to children’s wear, to jewellery.

In 2012 Hangzhou was ranked the “second best city” in the Forbes list for “starting a business in Mainland China”, after Shanghai. In fact, over 5000 SMEs emerge on average in Hangzhou alone every year. Hangzhou has an abundant pool of private capital, a high quality labour force, competitive business costs and provides a favourable climate for business start-ups.

Hangzhou aspires to become the financial services hub of the southern wing of the Yangtze River Delta. There are four main drivers that are contributing the fast growth and success of the financial services industry in Hangzhou: strong retail demand, favourable policies, growing corporate demand and its innovative environment. In 2011, the added value of Hangzhou’s financial services industry reached RMB73.2billion (an increase of 20.9% from the previous year), which accounted for over 10% of Hangzhou’s GDP. Located in one of the wealthiest provinces, Zhejiang province, combined with the city’s strong savings culture, allows for an abundant supply of capital in the city, Hangzhou had over RMB1,839.7billion in savings accounts at the end of 2011. Also, Hangzhou is ranked third nationally for the number of HNWI with net worth over RMB10million.

The banking industry in Hangzhou saw 53 institutions achieve profits of CNY40.2billion in 2011 with a non-loan performing ratio of only 0.8%, one of the best in China. The insurance industry achieved profits of RMB21.1 billion in 2011 and is made up of 63 institutions and is the second pillar of Hangzhou’s financial services industry along with banking. The number of private equity and VC firms in Hangzhou increased by 36% to 403 in 2011 ranking it fourth nationally in terms of numbers. Hangzhou is a popular destination for foreign banks and foreign insurance companies with 9 and 11 present in the city in 2011. Global companies that have strategic investments in Hangzhou include IDG Capital, Citibank, Morgan Stanley, HSBC, Allianz and DBS Bank.

In 2005, the Commonwealth Bank of Australia entered into a strategic cooperation agreement with the Bank of Hangzhou (formerly Hangzhou City Commercial Bank (HZCCB)) which involved CBA purchasing 19.9% of the shareholding in HZCCB for approximately AUD100million, with Board representation. The partnership involves a structured capability transfer program whereby CBA will assist HZCCB in key areas in order to improve its competitiveness and profitability. HZCCB is ranked by assets in the top five city commercial banks in China.

In 1993, the Hangzhou Economic and Technological Development Area (aka HEDA) was established and is one of four Economic and Technological Development zones within the city. It now has a population of over 400,000, covers an area of approximately 105km2 and its industrial output value reached over RMB130billion (US$20.79bn) in 2010. The four dominant industries based in the area are IT, biomedicine, equipment manufacturing and food and beverages and the area ranks in the top ten development zones nationally. HEDA has comparatively relaxed regulations, offers investment and R&D incentives, and is a large and significant infrastructure development.

Whilst Shanghai outstrips Hangzhou by miles in terms of attracting foreign investment, it may in future draw the limelight as a place for foreign companies to do businesses and establish their China base. Currently over 33 multinational corporations among the Fortune 5000 have invested in enterprises in HEDA. In addition, many iconic transnationals have also established production lines in Hangzhou, including Siemens, LG, Panasonic, Mitsubishi and Toshiba.

With the support of the state government, Hangzhou has developed a strong reputation as an international manufacturing base and ecological centre and has led the way in advanced technological development and global research & development in emerging modern industries such as energy, medicine, materials, logistics, IT and financial services.

As a fast growing second tier city in the Yangtze River Delta region, and only a short one hour train ride from Shanghai, Hangzhou is becoming an important strategic location for foreign companies looking to establish operations in eastern China. This is only highlighted by the extraordinary growth of two of China’s best known success stories, Alibaba and Wahaha, and ensures a steady growth of business visitors and tourists.

Business leaders, entrepreneurs and financial services professionals should add a visit to Hangzhou on their next trip to Shanghai.