FOOD AND BEVERAGE (FOCUS ON SEAFOOD AND WINE) 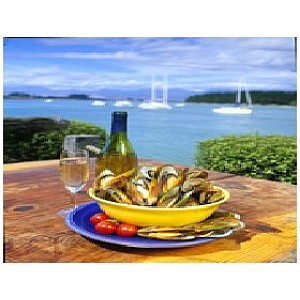 New Zealand Trade and Enterprise’s (NZTE) strategy in China is to focus on key sectors in which New Zealand has a competitive advantage. Food and beverages an obvious one.

A number of factors are behind this growth. Disposable income is rising in China, more Chinese live in cities, brands are getting better exposure and retail distribution is improving.

Higher incomes are also adding sophistication to the market. Urban residents in particular are spending more in supermarkets on processed, packaged and imported food and beverages and eating out in restaurants.

NZTE’s aim is to help Kiwi companies take advantage of these trends by developing higher value products and services designed for the Chinese market and then for them to control their brands, as far as possible, through the supply chain.

New Zealand still has a long way to go though before it comes close to realising the full potential of Chinese food and beverages market.

Chinese people living in New Zealand can help our food and beverages companies. They understand both cultures and can identify opportunities in both countries.

I’d like to concentrate on the potential of two of our food and beverages products in China – seafood and wine.

Fish is already a top 10 New Zealand food and beverages exports to China, worth nearly $100 million in 2010.

China is of course already a seafood superpower. It is the largest consumer, importer, exporter and producer of seafood in the world, representing approximately 35 percent of total global production.

Chinese appetite for seafood is expected to grow strongly for the foreseeable future, representing a great opportunity for New Zealand seafood companies.

However, it is not just about increasing volume. An estimated 80 percent plus of New Zealand’s seafood exports end up processed in China and then re-exported.

With stronger marketing, there are opportunities to increase New Zealand’s supply of higher value seafood and aquaculture products such as rock lobster and abalone. It is also likely that China will increasingly look to countries such as New Zealand for a sustainable supply of aquaculture in coming years.

Imported seafood is highly esteemed by Chinese consumers. Live seafood, especially lobster and abalone, are symbols of luxury. There’s little branding of live seafood in China, but there is an increasing awareness of country of origin and quality of product, including New Zealand’s Greenshell Mussels™.

Wine is now among New Zealand’s top 10 F&B exports, but sales are growing quickly off a low base.

Wine exports to China have grown from just over $3 million in 2008 to $17 million in 2011, a 456 percent increase. New Zealand was the eighth largest wine exporter to China in dollar terms in 2010 with the average price per litre of New Zealand wines the highest of the top 15 exporters of still, bottled wine to China.

This growth reflects the fact that wine drinking is gradually gaining in acceptance in China thanks in part to the influence of Western eating and drinking habits along with rising incomes.

Wine is becoming a fashionable drink for the wealthy younger generations of urban Chinese and the favoured drink of China’s elite.

The Chinese wine retail market is forecast to grow at a compound annual growth rate of 10 percent to 2016.

For New Zealand wine companies wanting a stake in this growth, there is not only the traditional competition from Australia, Europe and the US, but also from domestic Chinese wines which are improving in number, variety and quality. Domestic wine accounts for 89 percent of the Chinese still wine market.

There are more than 500 wineries in China. The top three local wine brands (Changyu, Great Wall and Dynasty) control as much as 50 to 60 percent of the wine market.

However, the high-end market in the tier one cities of Beijing, Shanghai, Guangzhou and Shenzhen is dominated by imported wine brands.