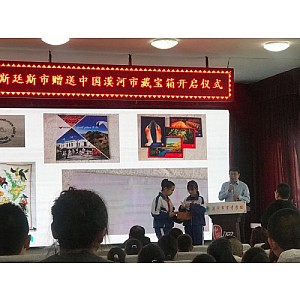 The first of the treasure chests sent to cities and regions in China for the Amazing China-Hastings Year of Tourism has been opened to much fanfare.

A city in northern China opened their gift at a formal ceremony on Monday November 18 and sent photos and videos of the event back to Hastings.

It started with the playing of a video addressing the city prepared by Hastings District councillor and project director Kevin Watkins.

He told invited guests and students that the Amazing China-Hastings Year of Tourism project opened up opportunities for friendship between the two cities.

The highlight was the opening of the treasure chest, which held a hand-turned wooden bowl - one of 33 prepared and gifted by the Hawke’s Bay Woodturner’s Guild, a polished paua shell, a fabric map of New Zealand showing Hastings, publicity materials showing some of Hastings beautiful sites, and a card describing the importance of the gifts.

Now the students of Yucai School have been challenged to come up with a gift for Hastings that uniquely identifies their region.

The Hastings project, officially supported by Minster of Tourism Kelvin Davis, Tourism New Zealand and the Ministry of Business, Innovation and Employment, is part of the China-New Zealand Year of Tourism, designed to increase cultural understanding and relationships between the two countries, leading to expanded tourism and trade opportunities.

Hastings and all of the participating regions in China are exchanging chests, with the China gifts becoming the focus of a 2020 competition for Hastings secondary school students. They will need to match the gifts to their home regions in China, with the first three to complete the task winning trips to China.

This article was first published by Hastings District Council.