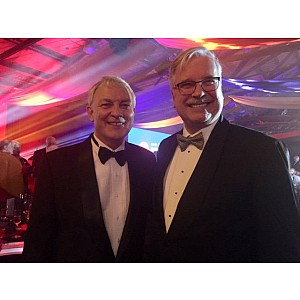 Mayor Goff was presented with the prestigious award at a gala dinner held at Shed 10 on Auckland’s waterfront on 6 June. More than 500 hundred people attended including Trade Minister David Parker, China’s acting Consul General in Auckland, Zhou Wei as well as CEOs and representatives from companies across China and New Zealand.

Phil Goff said he was honoured to receive the award and praised New Zealand and China’s strong and growing commercial and trade relationship.

“China-New Zealand trade has boomed in the 11 years since I signed our Free Trade Agreement as Minister of Trade in 2008.

“Two-way trade between our countries has more than trebled, the balance of trade has moved strongly in New Zealand’s favour, and China has become our largest export market.

“It has been enormously satisfying to watch New Zealand companies find success in China. The size and scale of the Chinese market continues to present huge opportunities for Kiwi business and exporters.

“I want to thank MFAT and NZTE officials for their support when I was Trade Minister, and for their continued efforts to grow our business and trade links with China.

Auckland hosted delegations from Guangzhou and Los Angeles in May as part of the five-year-old Tripartite Economic Alliance, forged to boost economic, trade and investment opportunities between the three cities and deepen Auckland’s connections with two of the economic powerhouses in the Asia-Pacific region.

Phil Goff said it was fantastic to see Auckland playing a leading role in the New Zealand-China relationship, and he looked forward to seeing the relationship continue to mature.

“My thanks to all those who have worked hard to create the strong and mutually-beneficial relationship that New Zealand and China enjoy today.”

Press Release: Office of the Mayor of Auckland