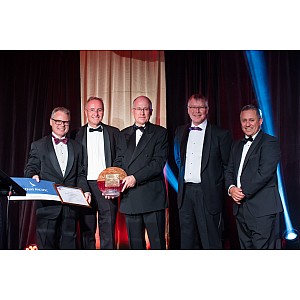 The New Zealand China Trade Association announced the winners of their HSBC NZCTA China Business Awards at a ceremony in Auckland on 6 June. These are arguably New Zealand’s most important acknowledgement of the deepening trade and investment relationship between China and New Zealand.

The Supreme Award winner (overall winner from six categories) was the Fiordland Lobster Company. The company was also the winner of the NZCTA’s trade award category (the Trade & Enterprise award for trade between China and New Zealand).

The Fiordland Lobster Company is New Zealand’s largest exporter of live Fiordland Rock Lobster, a high quality, high value, cold water lobster. Marketed under the KiwiLobster brand, the fish is flown by helicopter live from its landing by Fiordland fishermen (and also by fishermen in other areas such as Mahia, Otago and the Wairarapa) to processors in New Zealand. The catch is then air-exported from Christchurch or Auckland to international destinations, the chief of which is China. The fast export, receipt of product and on-sale to Chinese consumers has been made possible through an increase in air services between China and New Zealand.

“This is a remarkable supply chain. It enables this absolutely delicious product to be rapidly delivered to China, cleared through customs, and sold as the premier, ‘must have’ item on diners’ tables,” says NZCTA Chairman and DLA Piper partner Martin Thomson.

The lobsters’ New Zealand identity and branding is unmistakable. They are tagged with a QR code which leads back to Fiordland Lobster Company’s WeChat presence, and describes the integrity and origins of the product.

Fiordland Rock Lobster began 30 years ago when 15 Fiordland fishermen formed a partnership with Mt Maunganui Seafoods, which was then pioneering live lobster exports to Japan. It has continued to lead innovation in seafood marketing and catch management.

Other winners of NZCTA awards were:
SkyCity Entertainment Group, which won the Auckland Airport Award for contribution to the growth of Chinese tourism in New Zealand.

Trademonster Limited, which won the Cathay Pacific award for best use of ecommerce in exporting to China.

Martin Thomson said that the NZCTA awards and its winners reflected important and valuable changes in New Zealand’s relationship with China, including New Zealand’s trade with China which had exploded with growth. “It hit $30 billion last year, two years ahead of target in 2020,” he said. “What’s fantastic about this growth is that it’s not just vested in the Fonterras of New Zealand’s trade world. The contributors to trade are diverse, and there’s growth in new areas such as fresh meat and e-commerce.”

“The Overseas Investment Act reform paper put out in April by the Government says New Zealand has lower levels of overseas investment when compared with similarly developed small countries, and too low a level of greenfields or new site investment. China has been filling that gap, along with others. And it has benefited New Zealand. We need to be fostering more of this sort of capital investment,” he said.

On the positive side:
“Chinese investment in New Zealand is characterised by diversity as is evidenced by the entrants and winners of the NZCTA awards. It’s creating infrastructure to manufacture high value products, which is good for New Zealand,” said Mr Thomson.

The HSBC sponsored, NZCTA China business awards recognise a range of businesses and people including export led businesses; those in Hong Kong; major contributors to the relationship between China and New Zealand; growers of tourism; and catalysts for Chinese investment in New Zealand. The awards attracted a greater number of entrants than ever before this year.