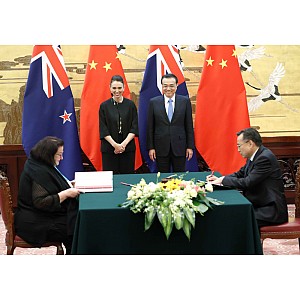 Prime Minister Jacinda Ardern and China Premier Li Keqiang advanced trade and a range of other issues in a meeting in Beijing on 1 April.

“A key focus of our meeting was reiterating our shared commitment to the Comprehensive Strategic Partnership between our two countries,” Jacinda Ardern said.

“China is a valued partner for New Zealand and it was clear China also values its relationship with New Zealand.

“I thanked Premier Li for China’s support for New Zealand following the recent Christchurch terror attack, in particular the condolences from the Chinese Government.

“Premier Li and I discussed the importance of the economic relationship between New Zealand and China and ways this can be strengthened.

“The New Zealand-China Free Trade Agreement has significantly benefited both countries. China is now our largest trading partner and two-way trade recently exceeded $30 billion dollars for the first time, a significant milestone in the trading relationship.

“We discussed the FTA upgrade, and agreed to hold the next round of negotiations soon and to make joint efforts towards reaching an agreement as soon as possible.

“We also discussed China’s Belt and Road Initiative, noting that the Minister for Trade and Export Growth, David Parker, would lead a business delegation to the Belt and Road Forum in Beijing in April. This will help identify opportunities for mutually beneficial and transparent cooperation so we can complete a work plan as soon as possible.

“I reiterated to Premier Li that New Zealand welcomes all high quality foreign investment that will bring productive economic growth to our country.”

“Following our talks, Premier Li and I witnessed the signing of a number of arrangements that further deepens the significant economic engagement between New Zealand and China.

“Premier Li and I also discussed regional and global issues where New Zealand and China have common interests including our support for the WTO,” Jacinda Ardern said.

Prime Minister Ardern and Premier Li also released a joint statement (click for attachment) that committed both countries to working together more to address the impacts of climate change.