In step with China's Terracotta Warriors at Te Papa 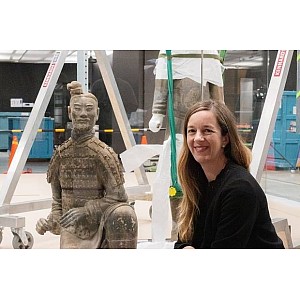 The Terracotta Warriors are back and the 2300-year-old Chinese treasures have impeccable timing, writes Eleanor Barker.

Thirty years ago, when David Lange introduced the Terracotta Warriors to New Zealand, he noted that although China was emerging as our biggest partner in trade, we still didn't understand its culture or people terribly well.

Te Papa curator Dr Rebecca Rice isn't proud of the enduring nature of the Lange quote: "I think it's sad that you could say the same thing 30 years on, but it is even more true today. China is one of our biggest visiting populations and also one of our biggest growth and economic opportunities. I think we owe it to them to try to understand and engage with their culture a lot more. I think this is a wonderful way to encourage people to think a bit more broadly about China; its history, its present, its future."

To be in the presence of Terracotta Warriors: Guardians of Immortality as a Pākehā is to be culturally dwarfed. The two-millenia-old story of the First Emperor takes on the quality of a fable at every turn and his long-hidden legacy in objects is rather overwhelming.

Qin Shi Huang "First Emperor of Qin" was clearly a man of great vision. After becoming King at 13, he led Qin (pronounced "chin") to unify China for the first time, aged 38. He survived three assassination attempts before reportedly dying from a mercury-based immortality potion nine years after unification. The Qin dynasty he had dreamed of crumbled within 15 years, but the title of Emperor endured. So did his army.

This was a man who was well-prepared for his death, if not the aftermath. His mausoleum was 38 years in the making and, for more than 2000 years, remained hidden before being accidentally interrupted by modern life in 1976. Archaeologists are still making their way through the catacombs of one of the greatest archaeological finds of the 20th century. In 2001, excavators found 15 terracotta musicians and 46 bronze waterbirds in the necropolis, entertainment for the afterlife. There is still so much to discover that the actual tomb of Qin Shi Huang remains unexplored to this day, even now protected by his legacy.

Standing at more than 180cm tall, their method of creation is unclear. Some believe that extensive use of moulds along with some hand sculpting is the answer. Other historians suggest they are individually crafted from thick coils of clay from the feet up. A huge feat, either way.

The eight statues come alive thanks to their unique features: their faces, hair, clothing. You can't help but become convinced they are each based on individual men who served the Emperor and in return were made immortal.

Half-size bronze chariot replicas, each drawn by four stone horses, have been strikingly displayed through clever use of projections. Rice's favourite piece is a bronze goose, afterlife food, that wonderfully illustrates the sophistication of the ancient works.

The exhibition, on display until April 22, includes more than 150 artefacts of gold, jade and bronze from the imperial tombs in and around Xi'an, dated from 1046BC to 220AD.

The beauty of these ancient objects is hard to overstate. Everything invites inspection.

I was captivated by a small jade tiger, skilfully carved, before I knew it was the oldest piece in the collection; it is about 3060 years old. Our cultures share a great reverence for pounamu, or jade. The ancient Chinese fashioned jade into a circular shape they imagined heaven to be, a circular shape not unlike the koru. You don't have to look far to find common ground.

Flies Auckland to Wellington, with one-way Seat fares from $56.

Coming up from February 5-24 is Lanterns of the Terracotta Warriors. Ninety brightly coloured Chinese Lantern Warriors by Xia Nan will take residence in the Te Papa forecourt.

This article was published by NZ Herald.