<< Opening of Terracotta Warriors: Guardians of Immortality Queenstown Tourism leaders head to China ahead of the 2019 China-New Zealand Year of Tourism >> 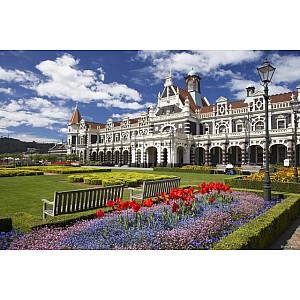 Dunedin’s relationship with China continued to bloom last week as a delegation from the city travelled to Shanghai and Wuxi to further connections between cultural, educational and business sectors.

“Yu Garden is 459 years old and one of the most popular tourist destinations in Shanghai, attracting over 6 million visitors each year.

“So, the exhibition featuring photos of the Dunedin Chinese Garden will be viewed by many people, but it’s also an important symbol of the sister city bond between Dunedin and Shanghai and the sister garden bond between Yan Yuan and Lan Yuan,” says Mr Cull

The opening was attended by a number of Chinese dignitaries, the Shanghai Chamber of Commerce and the University of Otago Alumni, among other guests.

As part of the ongoing relationship between the two gardens, next year the Yu Garden will feature a Dunedin education themed photographic exhibition, showcasing the city’s academic offering and lifestyle.

Another highlight of this week’s visit was the signing of a friendly cooperation agreement between Dunedin and Wuxi, a city of about 6 million people near Shanghai.

The relationship between the cities has blossomed quickly over the past two years thanks to links between the University of Otago, Enterprise Dunedin and Wuxi’s Jiangnan University, particularly in the food science area.

The agreement seeks to expand those links into other areas of education and common interests including health science, digital excellence, high-end equipment manufacturing, new energy, energy conservation and environmental protection.

Wuxi is the base for China’s ‘Internet of Things’ industry and one of the nation’s most innovative cities. Building on Dunedin’s growing tech and digital sector, gigcity status and plans for a Centre of Digital Excellence here, there are opportunities for companies from both cities to collaborate in this space.

Representatives of Dunedin’s education sector also visited the city of Nanjing, where they met with the Jiangsu Broadcasting Corporation, the third largest broadcasting company in China. As a result, Dunedin will be profiled as a study destination via their channels to millions of viewers.

Other elements of the week included attending one of China’s largest international export expos, CIIE, where the Mayor was invited to the opening ceremony, a visit to Jiaotong University, which jointly teaches a Doctor of Business Administration programme alongside the University of Otago Business School. The group also met with a digital and gaming company.

<< Profile  < Opening of Terracotta Warriors: Guardians of Immortality | Queenstown Tourism leaders head to China ahead of the 2019 China-New Zealand Year of Tourism >