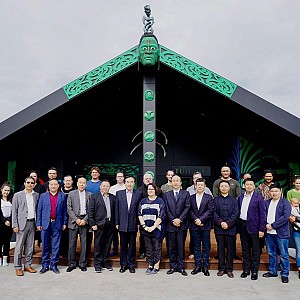 A large delegation of leading Chinese Jade experts and dignitaries was hosted by Te Rūnanga o Ngāi Tahu in Hokitika on 21 September in the second of three events to progress the establishment of a New Zealand-based pounamu carving institute.

The Institute will bring together cultural exchanges and utilise the teaching of both Ngāi Tahu and Chinese Master carvers to train carvers from across Aotearoa and China.

The delegation of Chinese master Jade carvers, key representatives of the Chinese Jade industry, and other senior business representatives and Government officials visited New Zealand from 18 to 25 September as the first step in this cultural exchange between China and New Zealand.

“We are thrilled to be able to explore opportunities to enhance the capability of pounamu carving in both Aotearoa and China, adding considerable value and prestige to our taonga. Both our countries strongly value and are committed to the spirit of whanaungatanga, which is vital to building and nurturing positive and enduring relationships.”

“The title of Master Carver of Jade is an honour that is only bestowed on the very best Jade carvers in China. Chinese Master Carvers go through rigorous training and certification through the Chinese Advanced Jade Carving Institute and there are only 38 worldwide who have this title” said Mrs Tumahai.

This is the second time Ngāti Waewae have met the delegation, who first visited Hokitika in October 2016 where a partnership agreement was signed between the Beijing-based Chinese Jade Culture and Research Association and Ngāti Waewae-owned Wae Wae Pounamu.

The Chinese delegation visit includes the largest number of Master Carvers of Jade to travel out of China for an international visit of this nature.

The delegation visit is timed to coincide with the 10th anniversary of the China-New Zealand Free Trade Agreement (1 October 2008). Their New Zealand tour began with an official launch event hosted by Te Wānanga o Aotearoa, Ngāi Tahu and Ngāti Waewae in Auckland on Wednesday.

Mrs Tumahai said “These two wonderful events have deepened our relationship as we work together for the long-term benefit of our shared communities. We are really looking forward to our final gathering on Monday in Queenstown as we share more of our history and culture with each other.”

The series of three events are supported by Te Puni Kōkiri and New Zealand Māori Tourism.