New Zealand near top of bucket list for Chinese tourists 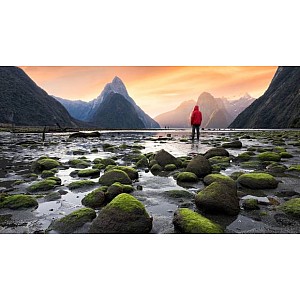 Research for a hotel booking site shows New Zealand is near the top of the wish list for Chinese visitors and reveals the ancient beliefs that help influence where they want to stay.

This country ranks third equal with France in the list of where first-time Chinese tourists would like to visit during the next 12 months, according to the Hotels.com study.

While ranked at 15th in the world for popularity among Chinese travellers - with 407,000 visitors in the year ending September 2017, the Chinese international travel monitor report shows New Zealand ranked only behind Australia and Canada on the list of where they want to go.

In the past year New Zealand ranked 10th in where Chinese felt most welcome, according to the Hotels.com research.

Next year is the ''New Zealand-China Year of Tourism'' when both countries hope for even more travel between the two countries. Wellington is the top on the wish list for future visitors (56 per cent ), Auckland (45 per cent) and Queenstown (31 per cent).

New Zealand gets only a fraction of the 120 million Chinese who travelled overseas last year and the 2019 ''New Zealand-China Year of Tourism'' could further boost arrivals here.

Hotels.com marketing manager for Australia and New Zealand, David Spasovic, said the report showed a new generation of Chinese travellers who were hungry for exciting travel experiences and in more far-flung places.

"Chinese millennials born after 1990 are particularly eager to cross the world, increasing their travel expenditure in the past year by a staggering 80 per cent and committing a third (36 per cent of their income to travel – more than any other age group – as they take full advantage of the strong exchange rate against the Kiwi dollar."

Just on 80 per cent of travellers visited here for leisure.

Natural attractions were the big pull, with Franz Josef Glacier named must see by 30 per cent surveyed, Maungawhau/Mount Eden crater (27 per cent), Fox Glacier (26 per cent) and Milford Sound (21 per cent).

"Chinese travellers love the country, and they love Kiwis. The Heart of the Long White Cloud campaign, launched in China by Tourism New Zealand, has allowed major Chinese influencers to showcase the country and its people, while visa changes in mid-2017 allowing multiple entries across five years look to encourage repeat visits,'' said Spasovic.

Chinese visitors are eager to taste local delicacies (38 per cent say they want to) such as manuka honey and buy authentic locally sourced items (33 per cent).

However, they did have some concerns.

The report highlighted how Chinese preferences for technology during their stays are not being met.

Booking and reservation methods were not up-to-scratch for a third of travellers, and local transport arrangements along with Mandarin speaking guides and hotel staff were also areas for improvement.

The report also found hat Chinese millennial travel anxieties were taking form in ancient superstitions, more so than their elders.

Some 40 per cent of millennials don't want a mirror opposite the bed, compared with 35 per cent for the generation of their parents.

They also wouldn't like to stay at the end of a corridor (41 per cent compared to 35 per cent) and are more reluctant to stay on a fourth or seventh floor, with words for both numbers having associations with death.