Growing Sichuan peppers in the Waikato 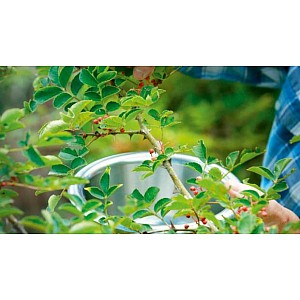 Many gardeners and food growers enjoy tending to unusual plants. They like the challenge and don't seem to mind uncertain outcomes.

In many cases, figuring out how to nurture, then harvest, process and cook unusual crops are much-anticipated milestones in a gardener's life.

Needless to say, when it all works according to plan, the results are naturally immensely satisfying.

So it goes for Lesley Fitzgerald and Jenny Oliphant, self-confessed "people who enjoy their tucker" and growers of the Sichuan pepper tree, Zanthoxylum simulans.

At their Pokaiwhenua Tree Farm in the Waikato, near Putaruru, they grow two of the plants, raised from seed. They were not entirely out on a limb though, having already grown a cousin of it, the Japan pepper (Zanthoxylum piperitum). There are several related peppers from the Zanthoxylum group.

"We were curious about another species," they explain. "We had also read and were inspired by Fuchsia Dunlop's (memoir) Shark's Fin and Sichuan Pepper."

At this point, gardeners everywhere must be nodding their heads in agreement with this logic, because, of course reading a cracker story or anecdote about a particular plant is enough reason to try to grow one, and Fuchsia Dunlop, an English writer and cook who specialises in Chinese cuisine, is particularly effusive about this one.

"That incomparable tongue-numbing sensation of Sichuan pepper, a fizzing that starts stealthily and rises to a mouth-streaming, breathtaking crescendo that can last for twenty minutes, before it slowly, gradually dies away. It is stronger even than I expected, and I laugh in surprise," she wrote in a chapter entitled Guilt and Pepper. "For years I have dreamt of tasting Sichuan pepper on the tree, and here I am, in Qingxi itself, my lips singing."

Jenny and Lesley are likely two of the extremely few people in New Zealand who can say they have also tasted Sichuan pepper like this. "There is nothing like the zingy, tingling, spicy flavour," they confirm.

Botanically, it is unrelated to the black or white peppers so common in Kiwi kitchens, and there is much more to this legendary spice than the "pepper" taste. It does undeniably pack heat, but this quality then gives way to a strange, numbing tingle on the tongue and in the mouth that can, frankly, be quite alarming if you're not expecting it.

These aromatics are held in the outer shell of the seed. The seed itself is tasteless in comparison, so Jenny and Lesley discard it completely, and grind up the husk for their own culinary use.

The couple had initially obtained the Sichuan pepper seed from Eastwoodhill Arboretum in Gisborne. At their farm, they propagate different trees and plants, including natives. Many of these – including the Sichuan pepper – are sold at the Tree Crops Association's annual sale in winter.

They sow the Sichuan pepper seed indoors in early spring, after three months of stratification.

Seedlings are moved outside when about 75mm tall and placed under shade cloth. When the seedlings reach approximately 300mm in January, they are potted up and put in full sun ("but they would be OK in part shade").

Jenny and Lesley's own nearly decade-old plants have received little attention, but still manage to fruit well enough – they have just harvested about 100g from each bush, and concede that a little TLC would've improved the crop.

The plants produce fruit on old wood, and Jenny and Lesley prune to shape in winter when the plant is dormant.

"Our existing two bushes are planted in average Waikato soil, and we understand that Zanthoxylum spp. will grow in a wide range of soils," the women say. Their plants are now 1.5m tall and seem to tolerate Waikato frosts well.

And while literature suggests the deciduous plants are dioecious (with male and female flowers on separate plants), the intrepid growers have observed that the plant can be self-fertile too. "Of course, having two or more plants would still increase the rate of pollination."

Best of all, they have not spotted any pest or disease – even the birds don't eat them.

Come harvest time though – when the berry husk starts to turn pink and eventually an appropriately livid, angry shade – the average gardener might come to doubt their devotion to growing exotic spices, because the large thorns are vicious.

Lesley and Jenny advise a "mindful" approach to the entire exercise of harvesting the crop if you wish to come away unscathed. For this reason, they add, it would be wise to plant in an out-of-the-way spot even though the leaves and bark are fragrant… and could, conceivably, tickle the nose of a thick-skinned gardener when brushed.