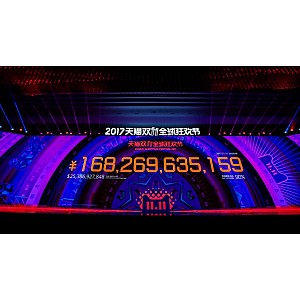 The first global order on Alibaba’s platform was placed by a New Zealand buyer.

“The opportunity for ecostore to expand its consumer base is significantly increased through sale days such as 11:11”, said Pablo Kraus, Managing Director of ecostore. “Chinese consumers are very sophisticated and their demand for an eco-friendly lifestyle continue to grow, so ecostore is honored to be a brand that consumers choose for its reliability, authenticity and being safe for all the family”.

“11.11 presents an amazing opportunity for us to raise awareness of Antipodes in the China market,” said Elizabeth Barbalich, CEO and Founder of Antipodes. “The Chinese market is key for us, with traditional plant remedies long considered an essential part of Chinese medicinal and beauty practices”.

“Our Chinese customers value our high quality natural New Zealand skincare and makeup which has been scientifically shown to produce results. The active botanical ingredients from New Zealand that feature in our premium products, such as avocado oil, manuka honey and mamaku black fern, are a real point of difference. Couple that with our distinctive wallpaper packaging and New Zealand’s clean green image, and you’ve got an irresistible formula for the Chinese consumer.”

In a sign of New Zealand’s deepening engagement with Alibaba and e-commerce, the first global order on Alibaba’s platforms during this year’s 11.11 Global Shopping Festival was placed by a buyer located in New Zealand. It was a purchase of a soy milk maker from Chinese brand Joyoung.

“More than US$25 billion of GMV in one day is not just a sales figure,” said Daniel Zhang, Chief Executive Officer of Alibaba Group. “It represents the aspiration for quality consumption of the Chinese consumer, and it reflects how merchants and consumers alike have now fully embraced the integration of online and offline retail.”

GMV for the 11.11 Global Shopping Festival is the total value of orders settled through Alipay on Alibaba's China retail marketplaces and AliExpress within a 24-hour period on November 11. It is reported on a real-time basis and includes shipping charges paid (where applicable). Transactions related to international brands, defined as brands created outside of Mainland China, and user data are limited to Tmall.

Alibaba Group's operating results disclosed in this press release are denominated in RMB; year-over-year comparisons and growth rates are calculated on the basis of RMB amounts and are not affected by foreign exchange rate fluctuations. All translations of RMB into US$ are made at US$1=RMB6.6282, the central parity rate announced by the People’s Bank of China (PBOC) on November 10, 2017.

All GMV, mobile GMV and other figures presented in this press release are unaudited and subject to adjustments.