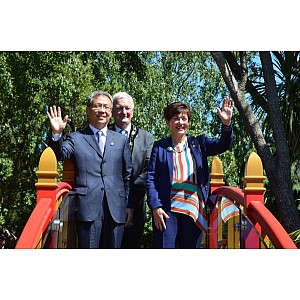 Amberley’s new China-New Zealand Garden was officially opened on Saturday 2 December by the Governor-General, Her Excellency The Right Honourable Dame Patsy Reddy. The opening of the garden cements the sister district relationship forged between the Hubei, Changping and Hurunui Districts and acted as a dual celebration of the work and legacy of the late Rewi Alley on the 120th Anniversary of his life.

To kick the event off, students from Amberley School performed a magnificent Haka and waiata for the audience. Mayor Winton Dalley followed by welcoming members of the Duan-Alley family and the Chinese delegation who had travelled to Canterbury especially for the Garden opening, and spoke of the symbolic nature the garden has for the Hurunui and Rewi Alley’s legacy.

Dame Patsy then spoke of how she felt privileged to be part of the opening of such an important garden for our district and spoke of the traumatic experiences Alley experienced while in China during World War II and the Chinese revolution. Once formalities concluded, Dame Patsy and Chinese Consulate-General Wang Zhijian jointly cut the ribbons, opening both parts of the garden.

Mayor Winton Dalley says it was fantastic to have the Governor-General in Amberley to open such a significant landmark that celebrates Rewi Alley’s life and the Hurunui’s sister district relationships with Hubei Province and Changping District that developed as a result of his work.

“The Hurunui District has always had a very special friendship with China through the legacy of Alley, who attended Amberley School which was once located in Chamberlain Park. This garden commemorates this friendship and celebrates Alley’s life as one of the most revered foreigners in China where he spent 60 years working for the improvement of life for the Chinese people.”

Dame Patsy also unveiled the New Zealand China Friendship Bridge plaque, officially opening the new bridge which symbolised the coming together of two nations through the work of Alley and a mutual respect for economic, educational and cultural ties.

“The concept of the bridge over the stream is to link the two gardens and is also symbolic of the linking of our two districts and nations. China is our largest trading partner for agricultural products and increasingly significant to our local tourism industry, so a good economic and cultural relationship is
mutually beneficial and I am thrilled the bridge will act as permanent epresentation of this.”

The formalities were followed by a garden luncheon, with the opportunity for attendees to enjoy a walk around the new developments at Chamberlain Park and meet the Corriedale sheep on display who were direct ancestors of the sheep Alley brought to China to develop their agricultural sector.

“I’m thrilled with the end result of the garden. We have a permanent symbol of our new sister district relationships formed as a result of Rewi Alley’s life work and our community now has a fantastic asset which will serve as a place of reflection for generations to come. We encourage people to stop and read the new story boards and enjoy the new garden and bridge,” says Mayor Dalley.