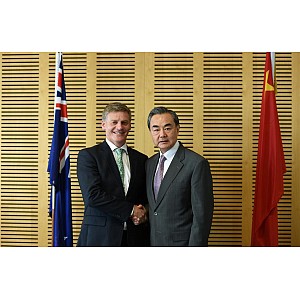 English, during the meeting, said New Zealand boasts several No.1s in China-ties, including the first Western country supporting China's joining in the World Trade Organization, China's launching of the Asian Infrastructure Investment Bank (AIIB) and the Belt and Road Initiatives.

The prime minister spoke highly of Chinese President Xi Jinping's speech at the 2017 annual meeting of the World Economic Forum, which delivers important and positive messages to the world.

New Zealand is keen to support globalization and free trade side by side with China, English said.

He also vowed to boost high-level exchanges, launch the upgrading negotiation of the bilateral free trade agreement, and cooperations in sectors including infrastructure, humanities, tourism, education, science and technology, and judicial enforcement.

The New Zealand leader also welcomes Chinese enterprises to invest in his country.

The Chinese foreign minister said the Sino-New Zealand relationship has displayed a model for cooperations between countries with different sizes and social systems.

New Zealand is among close partners from the West which meets the benefits of New Zealand and its people, said Wang.

He said the year 2017 marks the 45th anniversary of the establishment of Sino-New Zealand diplomatic relations.

The two countries, through the organizing of anniversary activities, could boost high-level exchanges, consolidate mutual trust and implement the strategic partnership.

Wang said China and New Zealand are both advocates and practitioners of free trade.

"Hand in hand, we should protect the international trade system, build an open economy, and try to start the upgrading negotiation of the free trade agreement," said the Chinese foreign minister.

He also expressed the wish that the two countries would join hands in connecting the Belt and Road Initiatives with New Zealand's infrastructure schemes.

Wang echoed English's calling for the enhancing of the mutual cooperation in sectors of humanities and judicial enforcement, which, according to him, will bring more substantial benefits to the two peoples.

Xinhua, Auckland
This article was first published by Xinhua
http://english.cctv.com/2017/02/10/ARTIMuV7bZdYXfB8w3A7FLBo170210.shtml