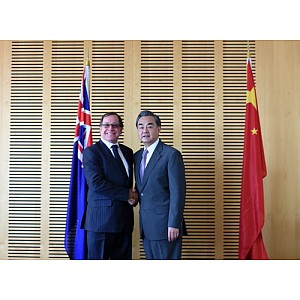 Wang Yi expressed that since the establishment of China-New Zealand diplomatic relations 45 years ago, bilateral relations have achieved leapfrog development and become a model of peaceful coexistence between countries of different social systems and territorial sizes. Pioneering in cooperation with China, New Zealand has created many “firsts” in such aspects as recognizing China’s full market economy status, signing and implementing a bilateral free trade agreement and participating in the Asian Infrastructure Investment Bank. With mutual respect and equal treatment, both sides established sincerity and mutual trust; with complementary advantages and focusing on cooperation, both sides achieve win-win cooperation. This is an important piece of experience from the strong and robust development of China-New Zealand relations, which is worth being further carried forward.

Wang Yi noted that in 2014, President Xi Jinping paid a historic visit to New Zealand, during which he decided to establish a China-New Zealand comprehensive strategic partnership, opening up broad prospects for bilateral relations. It is hoped that both sides can take the celebration marking the 45th anniversary of the establishment of bilateral diplomatic relations as an opportunity to well plan bilateral high-level exchanges in the next stage and expand new areas for comprehensive cooperation. China welcomes New Zealand to actively participate in the joint construction of the “Belt and Road”, and is willing to enhance cooperation in science, technology, and innovation between both sides, expand mutually beneficial cooperation in agriculture, animal husbandry, biopharmaceutical and other areas and elevate the level of judicial and law enforcement cooperation. Both countries should further enhance personnel exchanges so that it could become a new pillar supporting the development of bilateral relations. It is hoped that New Zealand could provide more convenience for Chinese nationals travelling to New Zealand. Against current international situation, both sides should not only continue to advocate the building of an open economy, but take concrete actions and initiate negotiations on the upgrade of the bilateral free trade agreement.

Murray McCully said that though different in territorial sizes and national conditions, the two countries have demonstrated exceptional leadership in signing the free trade agreement and other aspects, yielding satisfactory results. Both sides are growing increasingly closer in exchanges and cooperation in such areas as tourism, education, economy and trade. This year marks the 45th anniversary of the establishment of New Zealand-China diplomatic relations, providing a great opportunity for both sides to enhance high-level exchanges and push forward the comprehensive strategic partnership. New Zealand is willing to maintain high-level exchanges and further step up cooperation with China in economy, trade, innovation, people-to-people and cultural engagement, judiciary, law enforcement and other fields as well as actively participate in the “Belt and Road” construction. Both sides should actively devote to trade liberalization and the economic integration process. New Zealand looks forward to making concerted efforts with China to launch negotiations on the upgrade of the bilateral free trade agreement at an early date while playing a leading role in promoting regional economic cooperation. This conforms to the interests of both countries and is conducive to regional and even world prosperity and development at large.