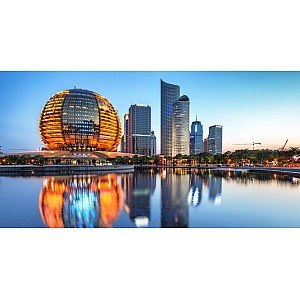 Traditionally overshadowed by metropolises such as Shanghai and Beijing in China’s international events, Zhejiang Province’s capital city of Hangzhou found itself in the global spotlight as it prepared to host the recent G20 Summit. Hangzhou made considerable press recently for the Chinese government’s intense efforts to beautify the city and ease congestion for its international guests, including by shutting down polluting factories, shipping away migrant workers, giving citizens vouchers to encourage them to vacation, and spending over US$1 billion on a new convention center. Despite these vast efforts, Hangzhou’s allure is not simply cosmetic. While China’s growth is slowing as its immense manufacturing sector struggles, Hangzhou continues to grow steadily on the back of its burgeoning high-tech industry, making it a model city for China’s broader economic transition.

The emergence of high-tech
With 6.9 percent GDP growth in 2015, China experienced its slowest growth in a quarter century, and many of its wealthy eastern coastal cities experienced lower growth in 2015 than the preceding year. For example, Shanghai’s growth slowed from 7 percent to 6.9 percent, Suzhou’s from 8 percent to 7.5 percent, and Nanjing’s from 10.1 percent to 9.3 percent. In contrast, Hangzhou’s GDP growth swelled from 8.2 percent in 2014 to 10.2 percent in 2015 to reach RMB 1.01 trillion – in spite of the fact that the city’s secondary industry growth tumbled from 8.1 percent to 5.6 percent. Hangzhou’s impressive growth is thanks in large part to its burgeoning high-tech and services sector, as the city’s tertiary industry exploded from 8.5 percent growth in 2014 to 14.6 percent the following year. The information industry amounted to 23 percent of Hangzhou’s total GDP in 2015 and drove 45 percent of its growth.

The emergence of Hangzhou’s tech industry owes much to being the birthplace of Chinese e-commerce giant Alibaba and its founder, Jack Ma. Alibaba, which owns e-commerce websites Taobao and Tmall, among other companies, made history for its US$25 billion IPO in 2014 – the largest ever. Not only does Alibaba attract significant business in its own right, but it also has ancillary effects that contribute to Hangzhou’s economy. Alibaba’s presence undoubtedly helped Hangzhou earn the title “Capital of E-commerce in China” by the China E-commerce Association in 2008. In April 2016, Hangzhou became one of China’s 10 cross-border e-commerce pilot cities, giving it preferential powers and tax policies for administering foreign goods. From 2004 to 2014, former Alibaba employees helped create about 130 internet companies, including the social media and fashion shopping platform Mogujie and ridesharing company DidiDache. DidiDache later merged with Hangzhou-based KuaidiDache, which later became DidiChuxing and defeated American competitor Uber for dominance in the Chinese market. The presence of such major firms allow for the transfer of skills and knowledge to facilitate startups and entrepreneurship.

Government promotions
The success of Hangzhou’s tech sector is not merely a byproduct of Alibaba’s enormous growth, but also a result of government efforts to promote the industry. The government provides tax breaks for high tech firms, with additional incentives for internet startups, including housing subsidies for entrepreneurs and events to promote private and foreign investment to support startups. The Hangzhou High-tech Enterprises Incubator is one of these initiatives, part of China’s wider Torch Program that supports entrepreneurship and innovation. Successful Chinese tech companies that received foreign capital in their early stages include Baidu, Suntech Power Holdings, and Focus Media Holding. Hangzhou also has several industrial parks and development zones, including the Hangzhou High-tech Industry Development Zone, which houses over two-thirds of the cities tech companies. Notable investors in this zone include Alibaba, Microsoft, IBM, Nokia, Panasonic, and Mitsubishi. Another key development zone is the Yuhang Future Science and Technology City, created to attract foreign talent.

The local government is proud of its support of entrepreneurs and private businesses, as well as its openness to foreign investment. According to Liang Liming, Zhejiang’s vice governor, the output value of the province’s private enterprises has China’s highest for over a decade running, and is home to 123 of China’s 500 best private companies. By the end of 2014, there were over 12,400 foreign-funded companies – with a combined capital of US$137 billion – registered in Hangzhou, while 34 Fortune 500 companies had at least one investment project in the city. Within the next five years, the Zhejiang provincial government aims to have 1,000 high-tech enterprises and 10,000 tech SMEs based in Hangzhou, collectively employing 300,000 workers.

Other key industries
While Hangzhou is quickly becoming known for tech and e-commerce, it is home to several other prominent industries as well, including equipment manufacturing and biotechnology. Though Hangzhou’s manufacturing growth declined in 2015, its equipment manufacturing industry performed strongly, posting RMB 108.61 billion in value-added output, a year-on-year increase of 13.5 percent. Hangzhou is also a large producer of bio-pharmaceuticals and bio-chemicals, and is home to Hangzhou East China Pharmaceutical Group, the largest antibiotics producer in Zhejiang. Foreign investment in encouraged in this sector, as part of an effort to acquire foreign technology and expertise to improve the industry’s research and development capabilities and move up the value chain. Pfizer is one overseas company that has recently responded to this need, as it plans to invest US$350 million in a biotech center in Hangzhou, the company’s first in Asia. In return for its investment, Pfizer hopes to navigate the complex regulatory and clearance process surrounding pharmaceuticals in China with greater ease, thereby giving it an advantage in accessing the country’s vast and lucrative market.

Some segments of Hangzhou’s economy may face difficulties in the future, however, as a result of rising property and labor costs. The city has a large food and beverage manufacturing industry, led by Hangzhou Wahaha Group – China’s largest beverage producer – which produces goods such as milk, soft drinks, juices, and canned foods. As operation costs continue to rise, this sector may eventually leave the city for lower cost locations such as Indonesia. Similarly, although Hangzhou is known as China’s “capital of silk and women’s garments”, this industry is also under threat due to its labor-intensive and low value-added nature.

Going forward
With the much publicized G20 conference, Hangzhou is beginning to enter the international consciousness as one of China’s leading innovation and tech hubs. The ancient former capital, known primarily for its serene West Lake and deep cultural history, is benefiting from China’s increasing focus on innovation, research and development, and high tech. The central government’s “Made in China 2025” campaign aims for China to make significant strides in value-added manufacturing by 2025 to replace the country’s reputation as a producer of low quality goods. By 2035, China aims to compete with developed industrial economies, and seeks to be a leader by 2049 – the 100th anniversary of the founding of the People’s Republic of China. Like many Chinese cities, Hangzhou may experience some difficulties as the economy shifts from an investment and manufacturing driven economy to one centered around consumption and services, and faces domestic competition from other tech hubs in cities such as Beijing and Shenzhen. However, with its leading tech sector, strong government support, and strategic location, Hangzhou is well-positioned to benefit from the government’s long term plans for the country’s economy, making it the ideal showcase for China’s economic ambitions.

Since its establishment in 1992, Dezan Shira & Associates has been guiding foreign clients through Asia’s complex regulatory environment and assisting them with all aspects of legal, accounting, tax, internal control, HR, payroll and audit matters. As a full-service consultancy with operational offices across China, Hong Kong, India and emerging ASEAN, we are your reliable partner for business expansion in this region and beyond.

For inquiries, please email us at info@dezshira.com. Further information about our firm can be found at: www.dezshira.com