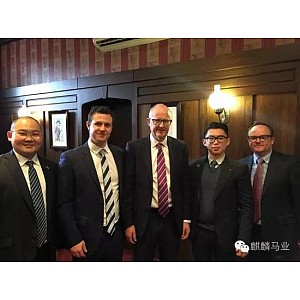 The signing of a memorandum of understanding agreement covers the marketing of the ‘Karaka Million Tour’ which will be promoted through a series of roadshows in Beijing, Shanghai, Guangzhou, Shenzhen and Chengdu.

The goal of the tour will be to attract a large contingent of clients from China to attend the Karaka Million twilight race meeting at Ellerslie and the National Yearling Sales Series at Karaka in January.

“Our members recognise the quality of New Zealand thoroughbreds on the racetrack and want to capitalise on the investment opportunities available to them,” said Kylin 500 Club’s New Zealand General Manager Alan Fu.

“The Yearling Sales Series at Karaka will provide our members with a first-hand New Zealand sales experience and will lead to stronger relationships between members and breeders, along with increased opportunity for racehorse ownership”.

New Zealand Bloodstock and the Auckland Racing Club have worked closely with Kylin to finalise components of the exclusive Karaka Million Tour that will include an official launch ceremony, cultural performances, a VIP function at the Karaka Million race meeting and hospitality throughout the National Yearling Sales Series at Karaka.

Cameron George, Auckland Racing Club CEO, said he was thrilled that his race club is a partner in the initiative.

“The continued investment and interest from the Chinese community in racing is a positive outcome for the entire thoroughbred industry,” George said.

“At this year’s National Yearling Sale Series we saw a large number of quality yearlings knocked down to Chinese buyers.

“Naturally, we want to continue to strengthen our relationships with groups such as Kylin and promoting the Karaka Million Tour to new buyers and visitors to Karaka represents a fantastic opportunity to do so”.

The first of the Karaka Million Tour roadshows will be held in November with the support of NZB, Auckland Racing Club, New Zealand Trade & Enterprise and Auckland Tourism, Events & Economic Development.

First published on Racing and Sports