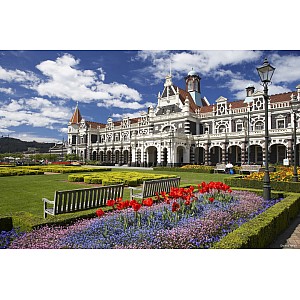 Dunedin's Mayoral-led delegation to China has signed a major education agreement which has the potential to lift Chinese student numbers into the city considerably.

Mayor of Dunedin Dave Cull signed the agreement in Beijing on behalf of the Dunedin City Council with JJL, one of the largest education consulting and service companies in China with 30% of the Chinese market.

Mr Cull says that as part of the agreement, JJL will promote Dunedin as a destination for quality education, actively broker Chinese students into secondary school and higher education opportunities, and work with the University of Otago, Otago Polytechnic and local high schools to increase the number of international students in Dunedin.

"Over 1,000 Chinese international secondary and tertiary students studied in Dunedin last year, which brought obvious economic and cultural benefits to the city. With over 4,000 international students annually, this vital sector is already worth about $165 million to Dunedin's regional economy, and this agreement could lift that considerably" Mr Cull says.

"The agreement with JJL means those numbers are expected to further increase over the next couple of years.

"The city has worked with the Study Dunedin partners, in particular the University of Otago and Otago Polytechnic, to develop a bespoke package to support the students. The DCC will also establish and maintain a regular dialogue, assistance and cooperation with JJL."

Other key events in Beijing included the signing of a memorandum of understanding between the University of Otago and the Chinese Service Centre for Scholarly Exchange.

Professor Helen Nicholson, Deputy Vice Chancellor, University of Otago says, "This MoU will strengthen our relationship with Chinese Universities and allow us to continue to develop strong partnerships in China."

Deputy Mayor Chris Staynes says, "It was inspiring to see a local Dunedin company succeeding in China and the developing relationship they have with CCTV."