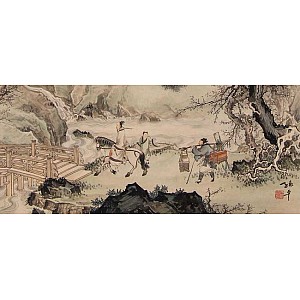 Connections between China and Hawke’s Bay go back to the mid-1800s, through art, travel, trade and conflict.

This long association is highlighted in a new exhibition, Bringing China Home, which opened on 15 July at MTG Hawke’s Bay.

At one time in the West, it was fashionable to display Chinese wallpaper, fans, porcelain and tea-sets, and Dr Beattie says many Hawke’s Bay homes reflected this. “Wealthier residents imported beautiful silk garments and grew species of Chinese flowers and ornamentals. And whatever their economic status, households everywhere used the classic blue and white dinnerware with scenes of oriental lovers fleeing a wrathful Mandarin.”

Looted items and memorabilia from the sacking of the imperial capital Beijing by Western and Japanese forces in 1900 also made their way back to New Zealand with returning military and missionaries.

Drs Beattie and Bullen are principal investigators on a three-year Marsden-funded project to investigate the scope of the Rewi Alley Collection held in the Canterbury Museum. Their research has led to exhibitions, radio and television interviews, a website, articles, talks and books covering different aspects of Chinese art and culture, and the New Zealanders who took a special interest in China.

“One of these was Hawke’s Bay landowner Henry Tiffen who travelled to China and Japan in 1880 and brought back exotic goods and seeds. And much later, lawyer-turned-farmer and Pacifist Bill Youren of Rissington, visited China three times between 1952 and 1960 and started collecting Chinese art. Art was seen as a way to break down the ‘bamboo curtain’ – to put a more human face on the country.”

The MTG holds much of Youren’s extensive art collection, on loan and gifted from the Curham family.

“This exhibition covers an interesting and extensive period, linking China with New Zealand, and Hawke’s Bay in particular. The objects collected in Hawke’s Bay over more than 150 years tell us a lot about life in China during what was its last imperial dynasty, the Great Qing Dynasty 1644-1911, followed by the declaration of a republic and the emergence of communism.”

Dr Beattie says Hawke’s Bay’s Chinese community increased slowly over the years, and although initially subject to racial discrimination, they made a significant economic contribution and gained social importance after World War II. By the 1960s there were 60 Chinese market gardeners in Hawke’s Bay, mostly working on land in the Bay View area.

The exhibition runs until 27 November.