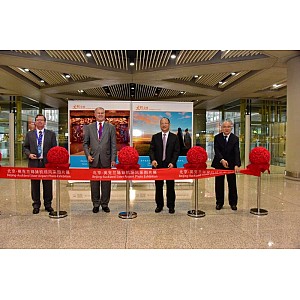 The exhibition, which ran until mid-July, was officially launched at an event attended by the New Zealand embassy and airline and airport officials.

As well as being Auckland Airport’s sister airport, BCIA is the main airport that serves Beijing and the busiest airport in Asia in terms of passenger and total travel traffic.

“In April, three young Chinese visitors travelled around the North Island as winners of the Auckland Airport ‘Four Seasons Five Senses’ Autumn competition. Their goal was to capture images for sharing with tourism operators and on social media, both during and after their trip. Two of those images featured in the exhibition at BCIA.”

“Beijing Capital International Airport is currently the 13th busiest airport in the world. It is estimated that in the July period, the number of international arrival passengers will reach between 810,000 to 820,000,” says Norris. “Having our New Zealand imagery on display at this airport is a fantastic opportunity to promote New Zealand, and the exciting travel experiences we have on offer here, to a vast number of people.”