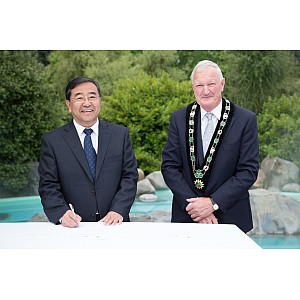 Hurunui district has always had a very special friendship with China – the legacy of Rewi Alley who attended Amberley Primary School, where his father was Headmaster from 1898 to 1907. At Amberley Primary School, there is a hall named after him. There is also a commemorative plaque in Chamberlain Park which was laid by the Rewi Alley Centennial Committee in December 1997.
The Hurunui District Council also has a very warm relationship with the office of the Chinese Consulate in Christchurch, and as a result of this relationship a delegation from Changping visited the Hurunui at the end of 2014, and following that visit, Changping expressed an interest in developing a formal strategic relationship with Hurunui district.
The Hurunui District Council have since explored what this formal relationship would entail and also looked at potential other partners. All of the research concluded that there are synergistic business opportunities available in Changping - particularly with respect to tourism, agriculture/horticulture and investment.
In July, the Hurunui District Council unanimously agreed to progress to a formal ‘Sister District type relationship, and today  a delegation from Changping led by Executive Deputy Mayor Sun Wei, joined with Hurunui District Council representatives to sign the historic papers that will mark the official commencement of this strategic relationship.
Mayor Winton Dalley says that the Hurunui district’s historic friendship with China has laid the foundation for this more formalised relationship with Changping  province – one that he expects to strengthen engagement and create significant economic benefits throughout the district.
“China is New Zealand’s biggest trading partner and as such a regional relationship with them is extremely important” said Mayor Dalley. “Formalising an agreement between us sets up an umbrella agreement for potential future trade, investment and educational opportunities between our districts.”
“This is a very significant step for the Hurunui; the friendship foundation that was forged so long ago has taken a modern twist with this new ‘Sister Friendship’ step.”