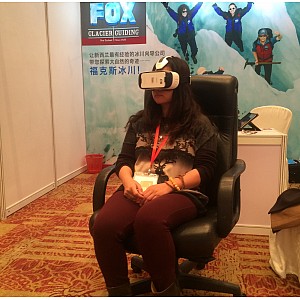 A South Island glacier guiding company is claiming a New Zealand tourism marketing ‘first’ with the development of cutting-edge visual reality technology to bring its product to the overseas buyer market.

Fox Glacier Guiding, in conjunction with VR specialists Creative Coast, has produced a ‘bite-sized’ taster of its Flying Fox: Heli Hike experience delivered via the latest VR headset that locks the world out and the experience in.

The new technology has been launched by Fox Glacier Guiding at the Kiwi Link China trade training event in Beijing.

A one-and-a-half minute taster of the Fox Glacier trip has been experienced by dozens of staff attending Kiwi Link who work for wholesale and retail companies and airlines selling New Zealand throughout China. Kiwi Link China is the largest ever this year with 59 operators and 120 agents.

Fox Glacier Guiding CEO Rob Jewell, who attended the show, said the headset had been a “huge hit” with everyone who tried it.

“It’s well and truly out now as agents and other New Zealand exhibitors heard about it and came by our stand to check us out.

“The new virtual reality technology certainly created the noise for us, with my tea and lunch breaks shortened with quite a few unscheduled VR viewings!

“Fox Glacier Guiding was the first New Zealand company to bring this medium to the event. Most of the Chinese agents had not previously experienced VR before and were amazed at how real it was and left wanting more.

“The agents described it variously as cool, awesome, incredible and beautiful, and many of them said it was so ‘real’ it was just like being there.

“We were delighted to have brought something so new to Kiwi Link. VR provides a taste of the experience by using new technology in a powerful way to deliver a new marketing message that’s so real, it's a 100% truth.”

The experience was delivered via a Samsung Gear VR headset using Oculus Technology.

“I was in Wanaka doing a presentation demonstrating use of the new headset technology which Rob happened to hear about on the grapevine. He thought it sounded perfect for Fox Glacier Guiding and knew immediately he wanted to take it to China.

“He signed up for it never having actually met me or put a headset on, but had the foresight to realise just what it could offer for his company.”

Mr King said footage was filmed on a helicopter and on Fox Glacier, and then converted into a format that enables the goggles wearer to be completely immersed in the glacier environment.

“It literally replaces the real world with a virtual world,” he said. “Its real footage edited together just like a TV advertorial but in ‘surround vision’.

“The wearer can turn their head around and see what they would really see if they were standing on that very spot.”

Fox Glacier Guiding staff member Sophie Chen, a fluent Mandarin speaker, narrates the Chinese-speaking introduction to the footage, and there is also an English-speaking version.

The introduction is an overarching welcome to Fox Glacier Guiding Heli Hike experience while the visually-strong images tell the story to background music.

Mr King described Fox Glacier Guiding as a market leader with the technology and a true forward thinker.

“This hardware and the technology has only just come of age,” he said. “Although it was released to the international market in January, it only came to New Zealand in July and there’s only one place to buy it.”