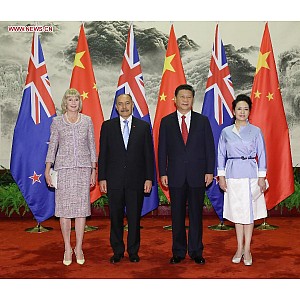 On July 21 2015, President Xi Jinping held talks with Governor-General Jerry Mateparae of New Zealand at the Great Hall of the People. The two heads of state spoke highly of the development of China-New Zealand relations and agreed to keep working together for constant progress in the China-New Zealand comprehensive strategic partnership.

Xi Jinping pointed out that China-New Zealand relations are now entering a new era of comprehensive cooperation. Both countries should continuously uphold the spirit of mutual respect, equality and mutual benefit to expand mutually beneficial cooperation in all areas and better benefit the two peoples. Both countries should also give full play to the guiding role of high-level exchanges in bilateral relations; strengthen exchanges and cooperation between governments, political parties, local areas as well as people of all circles thus consolidate political mutual trust and public opinion foundation; strive to expand and upgrade economic and trade cooperation and broaden cooperation in such traditional fields as agriculture and husbandry, and at the same time actively forge new cooperation growth points in such sectors as food safety, biological medicine, new energy and infrastructure construction. Both countries could elevate defense cooperation by high-level mutual visits between the two armies, defense consultation, joint training and drill, exchange of officers and soldiers and other means, and should enhance judicial and law enforcement cooperation and work together combating transnational crimes. China will expand people-to-people and cultural exchanges with New Zealand and hopes to boost bilateral contacts and cooperation in student exchanges, high-level talent cultivation, scientific research, Chinese teaching, sports and the like so as to forge a long-term and stable cooperative partnership between the two countries.

Xi Jinping noted that as important countries in the Asia-Pacific region, China and New Zealand share common interests in promoting regional stability and development. China will intensify communication and coordination with New Zealand on a cooperation mechanism and economic integration in the region and deepen bilateral cooperation under the framework of the Asia-Pacific Economic Cooperation (APEC). China is also willing to join efforts with all parties concerned including New Zealand to build the Asian Infrastructure Investment Bank into a mutually beneficial, win-win, professional and efficient platform for infrastructure investment and financing thus advance connectivity and economic development in the region.

Xi Jinping stressed that as this year marks the 70th anniversary of the founding of the UN, China will work together with New Zealand and the international community to firmly safeguard the victorious outcome of World War II as well as the basic norms governing international relations with the purposes and principles of the UN Charter as the core. We will also strengthen communication with New Zealand on the UN post-2015 development agenda, the Climate Change Conference to be held in Paris and other issues.

Jerry Mateparae noted that though different in national conditions, both countries share similar views on multiple issues and can totally boost cooperation on global issues such as climate change. Regional cooperation is an important part of bilateral relations. New Zealand will advance trilateral cooperation with China under multilateral frameworks such as the UN and the APEC and together help the small island countries in the South Pacific.

Prior to the talks, Xi Jinping held a welcome ceremony for Jerry Mateparae at the square outside the East Gate of the Great Hall of the People. Xi Jinping's wife Mme. Peng Liyuan, Vice Chairman of the Standing Committee of the National People's Congress Chen Zhu, State Councilor Yang Jiechi, Vice Chairman of the National Committee of the Chinese People' Political Consultative Conference Liu Xiaofeng and others were present.