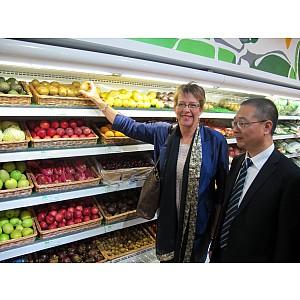 One of the ongoing success stories in Wellington in recent years has been the growing links between the Capital and our Asian partners. We’ve invested significant time and effort in developing our links with our Chinese sister cities, and other key partners. The results are encouraging, especially in the areas of digital innovation, film and television, cultural performance, food exports and education. Intrinsically linked with our economic growth is our growing mutual appreciation of our cities and countries. I’m delighted that with each delegation we make wonderful progress in bringing our people closer.

Healthy economic relations and trade underpin our efforts to grow closer with our Chinese and other Asian partners. Increasingly, our friendship is manifested in exciting cultural exchanges with each other and I was thrilled to host the award-winning cultural dance troupe of 54 students from Beijing’s China Youth University of Political Studies (CYUPS) in last year’s Santa Parade and the Shaanxi Little Blossom Qinqiang Opera Arts Group provided a mesmerizing performance at this year’s Chinese New Year celebrations in Wellington.

In February this year I led a business delegation to Asia with our regional economic development agency, several diverse businesses, and a focus on education. First we visited Hanoi, Vietnam, where we met Victoria University of Wellington alumni, Damwatch resilience consultants and celebrated 40 years of diplomatic relations with Vietnam, followed by Xiamen – one of our closest and most treasured sister cities – before we joined a significant New Zealand delegation at the Taipei Book Fair in Taiwan.

With a formal relationship of 28 years, Xiamen is our longest-standing sister city and the past year has seen many significant announcements that will strengthen our future connections.

In November last year I signed a Memorandum of Understanding (MOU) with Mayor Liu Keqing from the Xiamen Municipal People’s Government to establish a Chinese Garden on Wellington’s waterfront, which took place at the launch of the China New Zealand Mayoral Forum attended by New Zealand Prime Minister John Key and Chinese President Xi Jinping in Auckland.

The Chinese Garden, to be known as the Garden of Beneficence, will be located in Frank Kitts Park and will include pailau (gateway), tea house, pavilion, terraces, ponds, and courtyard stone carving in harmony with natural planting in the Chinese style. The Chinese Garden will be a lovely addition to Wellington’s waterfront, offering a place of quiet contemplation, natural beauty and contemporary Chinese design. More than three millennia of design heritage combined with the unique story of Chinese settlement in Wellington will contribute to a very special cultural addition to our waterfront, to join such loved features like the Wellington Writer’s Walk, the many sculptures and the Wharewaka.

Later that week Wellington hosted Mayor Liu Keqing in our Capital, where we signed a MOU to expand opportunities between the cities in civic administration, education and business, and several business-to-business trade deals.

On the recent delegation in February I took the opportunity to renew our relationship and met the new Mayor, Mayor Pei Jinjia. We reiterated our cities’ commitment to continuing co-operation, projects and a fruitful sister city relationship.

We held very productive discussions about the Chinese Garden. The discussions included landscape design and materials and looking at examples of ancient and modern Chinese landscape architecture. We also secured the commitment from the Xiamen Municipal Government and two companies (the ITG Group and Seashine Group) to support the garden by supplying materials and Chinese artists. The gardens in and around Xiamen show it deserves the title ‘Garden City’.

Very effective discussions were held with the Seashine Group, which is a significant food trader in the Fujian province, owning a large number of supermarkets and stores. The Seashine Group is establishing a network of stores stocking imported food, and proposes to have a New Zealand section in each. We are compiling a list of regional providers to maximise the opportunities for Wellington region producers including honey, dairy, fruit and wine.

The delegation also met with Xiamen University and explored further prospects for developing the existing links that VUW has in areas such as English language/ literature, English language training, architecture and vocational training.

As with previous visits, the Wellington delegation was hosted with grace and warmth by the officials and people of Xiamen.