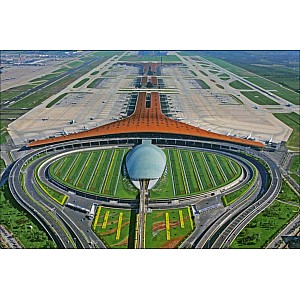 Construction of Beijing's new airport started on 26 December 2014. The project will cost 79.98billion yuan ($13.11 billion) and take about five years to complete.

The airport is designed to handle 72 million passengers, 2 million tons of cargo and mail, and 620,000 flights by 2025, according to the National Development and Reform Commission, which approved the plan on Dec 15.

It is expected to meet Beijing's rising demand for air transportation and help achieve balanced development in the capital's southern and northern areas, it said.

The new airport will be built in southern Beijing's Daxing district, which borders Hebei province.

Thousands of villagers in Daxing gathered at the site to witness the ground breaking ceremony.

"The new airport will create job opportunities for local people," said Li Zhenbing, who lives in the West Songgezhuang Village. "I hope that this airport could bring face-lifting change to my hometown."

Another local resident surnamed Liu told Xinhua that relocation of villagers hadn't started. "But after the relocation, my parents will not have to do farm work. They are old and should no longer toil in the field."

Experts believed the project could help boost the regional integration of Beijing, Tianjin and Hebei.

"The airport is located at the junction of the three, an area very important in regional planning and development," said Lian Yuming, head of the International Institute for Urban Development of Beijing.

Zhao Wei, deputy director of the airport management department of the Civil Aviation Management Institute of China, said that a medium-sized city will be formed within 30 kilometers of the airport. "Business as well as service and education industry will flourish there, with more than 1.5 million people benefitted," he said.

An official with the Civil Aviation Administration of China noted that the new airport could ease the burden of the Beijing International Airport.

Due to the limited capacity to handle flights, about 300 flights every day and nearly 10 million passengers each year cannot be handled by the Beijing Capital International Airport, according to the Civil Aviation Administration of China.