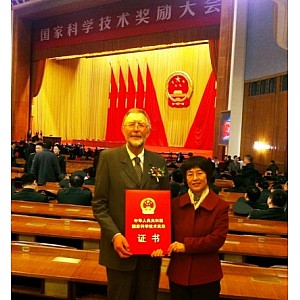 Science and Innovation Minister Steven Joyce has welcomed the news that Kiwi scientist Dr Phil Rolston has been awarded the Chinese Government’s most prestigious science prize for his work in grasslands seed development.

Dr Rolston, Senior Scientist at AgResearch Lincoln, received the award at a ceremony in The Great Hall of the People which was attended by President Xi Jinping, Premier Li Keqiang, and Minister of Science and Technology Wan Gang.

“The International Science and Technology Co-operation Award of the People’s Republic of China is that country’s highest accolade for foreign scientists,” Mr Joyce says.

“Dr Rolston has dedicated more than three decades of his working life to advance grasslands seed development and pasture improvement systems, especially in Gansu Province. Improved soil fertility has meant higher-quality pastures for famers, which is having a significant impact on productivity and profitability in the region.

“China is an important science and innovation partner for New Zealand. Research collaboration between the two countries is growing rapidly, and President Xi Jinping’s visit to New Zealand in November highlighted our deepening partnerships.

“This award is a tremendous honour for Dr Rolston, and a great example of how our best and brightest are forging strong and enduring linkages with China to build knowledge and expertise in new areas.”