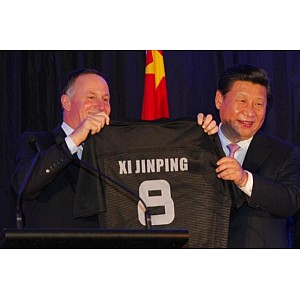 For a Better Future of the China-New Zealand Relations.
President Xi’s open letter to New Zealand ahead of his state visit.

Tonight, I will begin my first visit to New Zealand as the President of the People's Republic of China, bringing with me the friendly sentiments of the Chinese people to the people of New Zealand and an ardent wish to grow the China-New Zealand friendly relations.

New Zealand is a shining pearl on the Pacific Ocean, a country blessed with a hardworking, courageous and warm-hearted people, a dream place of idyllic beauty, and a land of abundant resources that are much favoured in the global market. The upcoming visit will be the third time for me to set foot on this beautiful country, and I am very much looking forward to the trip.

Every time I come across the subject of China-New Zealand relations, two touching stories will come to my mind. In May 2008, a massive earthquake struck Wenchuan County, Sichuan Province of China. A group of lovely children in Christchurch, South Island of New Zealand decided to do something for those affected in China to overcome difficulties. In spite of the cold wind of the Southern Hemisphere which was in its winter, the children went to the street and played the violin to raise money for the quake victims. In February 2011, Christchurch was also hit by an earthquake. On hearing this unfortunate news, the international rescue team of China responded swiftly and joined rescue operations immediately, contributing their share to the search and rescue of those trapped. As shown in both stories, although China and New Zealand are separated by the vast ocean, there is strong empathy between our two peoples in times of need. This is an epitome and a vivid example of friendship between China and New Zealand.

Since the establishment of diplomatic ties in 1972, the China-New Zealand relations have made historic strides forward, and practical exchanges and co-operation in various fields have reached unprecedented breadth and depth. The two countries have set many records in China's relations with developed countries. For example, China is now the largest trading partner and source of international students for New Zealand. In particular, New Zealand is the first developed country to have signed and implemented a free trade agreement with China. From more quality and inexpensive goods and services to more jobs, from more convenient people-to-people exchanges to better study opportunities, more and more visible and tangible benefits are made available to our two countries and peoples as a result of our friendly co-operation.

The journey of China-New Zealand relations proves that mutual respect and equality underpin the sustained, sound and steady growth of the bilateral ties, complementarity and mutual benefit give strong boost to the rapid expansion of practical co-operation, and the pioneering spirit and the readiness to seek common ground while shelving differences provide an inexhaustible source of strength to keep the bilateral relationship at the forefront of China's relations with developed countries. The China-New Zealand relations have gone beyond the bilateral scope and set a fine example for the pursuit of successful state-to-state relations.

In both China and New Zealand, strong winds of reform and development are sweeping across the country. The Chinese people are striving to fulfil the Chinese dream of great national renewal, comprehensively deepening the reform and opening-up programme, and advancing the rule of law across the board. New Zealand is making efforts to enhance its international competitiveness, step up infrastructure development, increase scientific and technological innovation input, and improve the economic structure. This has brought more converging interests between China and New Zealand. Aligning our development strategies effectively, we will have the rare opportunities and broad prospects for even stronger co-operation in all fields.

Under the new circumstances, friendship and co-operation between China and New Zealand have taken on a new mission. To better achieve development and prosperity in both countries, we need to join hands and build a better future of China-New Zealand relations.

Forge a new pattern of converging interests. The two countries need to advance practical co-operation in various fields and build a strong community of common interests. We should consolidate the basis of co-operation in agriculture, husbandry and other traditional sectors, and at the same time create new bright spots of co-operation. With China's strengths in infrastructure and manufacturing and New Zealand's advantages in agricultural science and technology, IT and clean energy, the two countries have much to offer to each other and may draw upon each other's strong points. The two sides should be committed to win-win co-operation, keep the markets open and create a more friendly and level playing field for our companies to access each other's market, make investment and grow businesses.

A famous Maori adage says, "Your livelihood is in your own hands". A new journey of co-operation for China and New Zealand is about to begin, and the future of China-New Zealand relationship is in our own hands. In the upcoming visit, I am looking forward to having discussions with the New Zealand Government and people from various sectors about ways to advance our co-operation and to joint chart the course for the growth of our bilateral ties. China is ready to move forward hand in hand with New Zealand as good partners for win-win co-operation and good friends sticking together through thick and thin, and work together for an even better future of China-New Zealand relations.

This letter was first published in the New Zealand Herald.