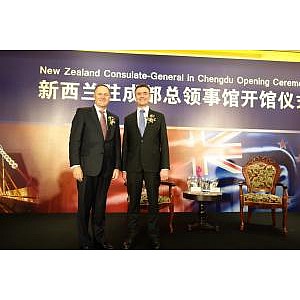 “New Zealand is among the first group of countries in the world to open a diplomatic post in Chengdu,” Mr Key says.
“This is a natural continuation of our expanding and increasingly close relationship with China.

“China is now our largest export market, as well as our largest source of imports.   Two-way trade with China exceeded $20 billion annually in May this year, ahead of the 2015 target.

Earlier this year, President Xi and I agreed to set a new and more ambitious target of $30 billion by 2020.”

The Consulate-General in Chengdu is one of six new posts the Government has opened since 2008. The others are in Abu Dhabi, Addis Ababa, Myanmar, Barbados and Honolulu.

“New Zealand’s economic prosperity relies on selling our goods and services to the rest of the world, and having good relationships with other countries, so we are working hard to ensure we have right level of resources in the right places to assist our exporters in the markets they are operating in,” Mr Key says.

The Chengdu post will have six staff and will have moved from the current temporary site into permanent premises by 2016.