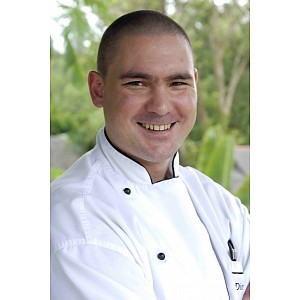 New Zealand Trade and Enterprise has appointed Dion McGrath as its new Consulting Chef based at New Zealand Central in Shanghai, China.

Dion’s role is a key part of NZTE's wider strategy to promote New Zealand food and beverage in China, in response to Chinese consumer trends.

A Kiwi, Dion has extensive experience of international cuisine. His career began in 1988 as a trainee chef in Te Awamutu. Since then he has been a top chef in Australia, Hong Kong, Egypt, Thailand and China.

He was most recently Executive Chef overseeing the JW Marriott and Courtyard Marriott Hotels Food Outlets in Shanghai and Hangzhou.

Dion’s style uses western and eastern ingredients and cooking methods. He says: “Having lived and worked in Asia for 20 years, I’ve adapted and fine-tuned different style of foods and trends to meet the growing demands of the guests I’ve cooked for. In-season fresh ingredients are the only way to go. The exciting thing about modern Chinese culture is that people are becoming more aware of what they are eating and that’s exciting for New Zealand products.”

Dion will be involved in leading and contributing to a number of initiatives, events and activities aimed at generating value for New Zealand food and beverage suppliers.

Mike Arand, NZTE’s Trade Commissioner in Shanghai, says: “The aim of the Consulting Chef is to not just show the Chinese media, chefs and the hotel and restaurants trade what New Zealand has to offer, it’s also about teaching them how our ingredients can be used in Chinese cuisine. It’s also about recognising the different regional styles of this vast country, and exploring the different ways of presenting and packaging New Zealand food products.”

NZTE’s Consulting Chef programme has been running for almost three years and has included collaborative promotions with 5-star hotels and restaurants to add New Zealand products to the menus; retail promotions to open doors for new products; a China F&B roadshow in New Zealand where experts in imports, distribution, food service and retail shared their experiences; as well as many magazine articles, cooking demonstrations and classes and social media activity.

The result has been a heightened interest in New Zealand F&B and more New Zealand products on the shelves at premium department stores and on the menus at premium hotels and restaurants.