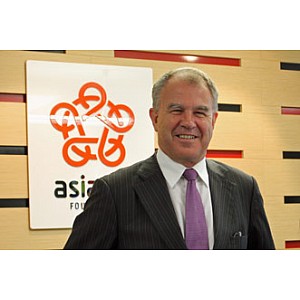 John McKinnon, the new Executive Director at the Asia New Zealand Foundation, has been a diplomat and government official for most of his life.

He has wide professional experience in dealing with Asian countries through his work at both the Ministry of Foreign Affairs and the Ministry of Defence, where he recently finished his term as Secretary of Defence. He is well-versed in all aspects of New Zealand’s relations with Asia and in international security issues.

We talked to Mr McKinnon about his past roles and his vision for the Foundation.

You were posted to China as a diplomat in 1978, and returned to Beijing as New Zealand’s Ambassador in 2001. How do you think New Zealand’s relationship with China has changed during that time?

Broadly, it has got deeper and more comprehensive. We’ve always managed to sustain a very good relationship with China, but the growth of China has altered completely the way in which almost every country interacts with it.

The opportunities that China presents and the way it now sends its goods and services and people out to the world have obviously changed completely. In that sense, the opportunities for New Zealand are much, much greater than they were back in the late seventies and early eighties. We have, through the free trade agreement, been able to take advantage of that.

When I came back to New Zealand at the end of 2004, I was surprised that the level of interest in China had increased markedly from five years before. I think that was a function of people’s increasing awareness of what was happening in that country and how it was affecting other countries, including our own. I have not seen anything to suggest that that has abated.

That also applies more generally across Asia. Clearly China does attract more attention because of it size, but the phenomenon that is China has also been replicated elsewhere across Asia – in India, in Indonesia and in Vietnam, and in other countries. Our experience in interacting with China is also relevant to our experiences elsewhere.

You have said you would like the Asia New Zealand Foundation to create light, rather than heat. What do you mean by that?

The light is a way of saying we want to increase people’s knowledge and awareness of Asia, without them thinking, ‘This is something alarming’.

Another way of thinking about this is to increase the access of people at senior levels in New Zealand – whether in government, business or elsewhere – to Asia where they might not normally have that in the course of their normal work.

Comments sections on news websites would suggest that some New Zealanders still have negative feelings toward Asia and its peoples. How can you counteract those viewpoints?

The contribution that the Foundation can make is to demystify Asia. People may be troubled or negative if they don’t know enough. Knowledge is a great solvent of those sorts of views. So are personal interactions and communications, whether through travel or involvement in local events such as Diwali and the Chinese Lantern Festivals.

When you look at how our country engages with Asia, I think by and large we are very successful. We have an amazing array of people who are exemplars of that in their own lives.

In the past few weeks I have been meeting members of the Young Leaders Network, whom the Foundation has been nurturing. They are an impressive group of people in their twenties and thirties who are undertaking a range of jobs both within New Zealand and offshore, not necessarily specifically to do with Asia, but they have an interest in seeing how this country can advance its links with Asia. When I look at those people and the sorts of things they are doing, I have a lot of optimism.

Are you considering any new initiatives for the Asia New Zealand Foundation?

We’re probably not going to run a cricket team ourselves, but the Asia New Zealand Foundation could think about ways of exposing New Zealanders to what is happening in the Asian sports environment. It’s trying to get people to think about linkages with Asia in a different way.

One thing the Foundation has to be very careful of is that it doesn’t just duplicate what is happening elsewhere – there are hundreds of sports bodies in New Zealand. What I’m thinking about is - where do our interactions with Asian countries sit in that?

We often hear that it’s very hard to learn Chinese. As someone who has learned the language, do you think it’s more difficult than other languages?

Secondly, if you want to be literate in Chinese, you have to master the characters. It’s not so much that it’s difficult, but it’s time-consuming and it takes a lot of memory work. The balancing factor is that the more you get into it, the more this whole world opens up for you.

How do you maintain your Chinese?

I visit China regularly – one of my children lives there. I have a lot Chinese friends, some of whom either don’t speak English or indulge me by speaking Chinese to me.

But another way that is quite good if you don’t have regular access to conversation is to read or watch movies. I read novels. My favourite Chinese writer is Yu Hua.

I quite like historical movies, and they produce a lot of historical dramas in China now. I also have a subscription to WTV. It’s interesting that in New Zealand you can now readily access Asian language media in a variety of ways. That’s something that has changed in the last decade.