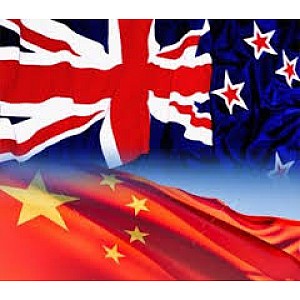 Joint Statement between New Zealand and the People’s Republic of China on the Establishment of a Comprehensive Strategic Partnership.

At the invitation of Governor-General Lt Gen The Rt Hon Sir Jerry Mateparae and Prime Minister The Rt Hon John Key of New Zealand, President Xi Jinping of the People’s Republic of China made a state visit to New Zealand from 19 to 21 November 2014.

During his visit, President Xi Jinping met with Governor-General Jerry Mateparae, and held talks with Prime Minister John Key. The leaders had an in-depth exchange of views on bilateral relations as well as regional and international issues of common interest.

The two sides reaffirm their commitment to the principles of the 1972 Joint Communique on the Establishment of Diplomatic Relations Between the People’s Republic of China and New Zealand, and spoke positively of the significant development of bilateral relations including the establishment of a New Zealand-China Comprehensive Cooperative Relationship in 2003, and the “four firsts” – New Zealand was the first developed country to conclude bilateral negotiations on China’s accession to the WTO (August 1997), to recognise China as a market economy (April 2004); to commence FTA negotiations with China (December 2004) and conclude an FTA with China (April 2008).

With the deepening of mutual trust and understanding, and the expansion of practical cooperation and exchanges, the New Zealand-China relationship shows that countries with different political systems, history and cultural traditions and at different stages of development can constructively cooperate together.

To better reflect the current level of the bilateral relationship and guide its future development, the two sides have decided to designate the relationship a Comprehensive Strategic Partnership. Within this framework:

1.    The two sides highlight the leading role of high-level interactions in maintaining and developing strong bilateral relations, including through Leaders maintaining regular dialogue, by exchange of visits, meetings and other means. The two sides are committed to deepening existing dialogue and contacts between Government agencies, legislative bodies, political parties, local governments, and private sector bodies of the two countries, establishing new mechanisms, and strengthening experience sharing and mutual learning in various areas. China and New Zealand will continue to strengthen cooperation between their two foreign ministries, holding regular bilateral diplomatic consultations and maintaining close communication on bilateral relations and issues of shared interest.

2.    The two sides reaffirm their commitment to comprehensively developing bilateral relations based on equality and mutual respect. They reaffirmed their commitment to respecting each other’s sovereignty and territorial integrity. New Zealand reaffirms its adherence to its one-China policy.

3.    The two sides recognise the significant progress in bilateral economic and trade cooperation, and the significant contribution of the New Zealand-China Free Trade Agreement to the growth in two-way trade, economic linkages, job creation, innovation and prosperity. The two sides note that China became the largest goods trading partner of New Zealand for the first time in 2013, and that the goal of doubling two-way trade to NZ$20 billion by 2015 was achieved ahead of schedule. The two sides promised to continue to implement the comprehensive and high-quality FTA, and fully utilize cooperation mechanisms such as the Joint Trade and Economic Commission and the FTA Joint Commission. Concrete and effective measures will be taken with the aim of achieving the target of NZ$30 billion in bilateral trade by 2020 set by the leaders of both countries. Both sides are committed to ensuring that the FTA remains relevant and current on an on-going basis.

4.    The two sides intend to consolidate and expand practical cooperation in agriculture and animal husbandry, including strengthening understanding and cooperation in the area of product trade, in particular animal product trade, supporting the capability-building of China’s dairy sector, and the commencement of a key agricultural cooperation programme – the Food Supervisory and Traceability Cooperation Programme. Both sides will continue to advance cooperation in the areas of finance and investment. Both sides reaffirm that they welcome the investment involvement of the other side’s companies.

5.    The two sides acknowledge their common interest in effective action on climate change, and have signed an Arrangement on Climate Change Cooperation during President Xi Jinping's visit.

6.    The two sides will support the deepening of people-to-people exchanges and expand cooperation in areas such as tourism, culture, sports, broadcasting and television and Antarctica. The two sides encourage further exchanges and cooperation by local governments in various fields, including deepening sister city and other innovative city to city relationships. The two sides welcome the signing of the Television Programmes Co-Production Agreement, under the New Zealand-China Free Trade Agreement, during President Xi’s visit. The Chinese side welcomes New Zealand’s recent visa facilitation package for Chinese citizens visiting New Zealand for tourism, and business, and is willing to work with the New Zealand side to create more favourable conditions for bilateral personnel exchange. The two sides will continue to encourage and support exchanges and cooperation between think-tanks, youth and the media of the two countries.

7.    The two sides will work together to further education cooperation, including by working to increase links between educational institutions, encourage teacher and student exchanges through scholarship programmes and other methods, increase Chinese language learning in New Zealand, cooperation in and share expertise on areas of mutual interests, and facilitate joint recognition of qualifications, under the framework of education arrangements in place between both sides.

8.    The two sides will strengthen cooperation and exchanges in the area of science and technology, reconfirm “Food Safety and Security”, “Water Research”, and “Non-communicable Diseases” as ongoing priority areas for collaboration, as set out in the Five Year Roadmap For New Zealand-China Science and Technology Cooperation signed in 2012, and continue to further enhance cooperation in commercialisation and innovation. Building on the priorities for cooperation, opportunities for further broadening research collaboration will be explored, which may include agricultural science and technology, information technology, environmental protection, bio-technology and medicine.

9.    The two sides will develop and implement a long-term engagement plan for defence engagement, focusing on ongoing high-level and other bilateral visits, strengthened strategic communication, and expanded cooperation in training and exercises.

11.    The two sides also acknowledge the positive development of practical and effective cooperation on crime and legal matters. This includes formal cooperation under the Treaty between New Zealand and the People's Republic of China on Mutual Legal Assistance in Criminal Matters and highly effective Police to Police cooperation (including under the framework of the Memorandum of Arrangement on Crime Cooperation and the Memorandum of Arrangement on Precursor Chemical Control, and other informal channels of cooperation). The two sides will continue to work constructively on these issues, including with respect to joint efforts to combat cross-border crime, and to facilitate the recovery of the proceeds of crime within our respective legal frameworks.

12.    The two sides reiterate their commitment to the promotion and protection of human rights and agree to continue constructive bilateral exchanges on the basis of equality and mutual respect.

13.    The two sides intend to maintain close communication and coordination on major international and regional affairs. The Chinese side congratulates New Zealand on its election as a non-permanent member of the United Nations Security Council for 2015-2016, and the two sides undertake to strengthen their cooperation in the United Nations. The New Zealand side congratulates China on its successful hosting of the 22nd APEC Economic Leaders Meeting, and appreciates China’s efforts in ensuring positive outcomes in areas such as regional economic integration, promoting innovation-based economic development, reform and growth, and strengthening comprehensive infrastructure and connectivity. Both sides jointly support progress towards the Free Trade Area of the Asia-Pacific, and agree to maintain close communication in the RCEP negotiations and on other regional economic integration initiatives. The two sides will further strengthen coordination and cooperation in international and regional mechanisms such as APEC, the East Asia Summit, the ASEAN Regional Forum, ADMM+, the WTO, and the Asia-Europe Meeting, and work together to promote peace, stability, and sustainable development of Asia-Pacific region and the world.

14.    The two sides reaffirm their commitment to work constructively in the Pacific region. The tripartite cooperation between the Cook Islands, China and New Zealand on the Cook Islands Water Project is progressing well and will deliver significant health and economic benefits to the local people.

15.    The successful state visit by President Xi Jinping has contributed significantly to the further development of the bilateral relationship. The two sides released the List of Announceables and Deliverables during President Xi Jinping’s State Visit to New Zealand, which listed a number of documents on bilateral cooperation in the areas of trade, finance, telecommunications, forestry, food safety and security, education, science and technology, tourism, climate change and Antarctic cooperation.