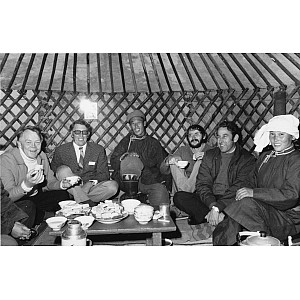 One of the pleasures of researching a book that surveys the totality of New Zealand’s links with China has been tracing the beginnings, false starts, and surprising initiatives along the way to today’s highly successful trading relationship. Not all have found a place in a necessarily selective anthology, but I hope there are enough to give a flavour and, in some cases, pay due homage to forgotten pioneers of the two countries’ commercial dealings.

It is generally acknowledged now that New Zealand’s very first exports were destined for China. Sealskins amassed by the crew of the Britannia in 1792 found their way to the Canton market, their intended end-use winter robes for Manchu grandees in Beijing and the north. In what was perhaps an indicator of future trends, only the best was good enough for China - the second-rate skins went to London, to be made into top hats.

Early trade with China faced a formidable obstacle – the jealously-preserved monopoly of the East India Company over China trading rights. That the monopoly was so tightly held was a tacit acknowledgement of the geographical advantage New Zealand (and Australia) enjoyed over Britain in pursuing trade links. The main effect was to give the inside running to the Americans. New Zealand’s China Experience quotes the representations of a British commissioner in 1823, asserting plaintively that American traders had established trade links with New Zealand’s Maori population, ‘notwithstanding the partiality and preference that the natives entertain for the subjects of Great Britain, and the knowledge they have acquired of the distinction between these and the Americans…’.

By the mid-nineteenth century, the East India Company’s monopoly was a thing of the past, and the China market beckoned New Zealand’s early European settlers. The anthology records the experience of Captain William Anglem, who saw a future in exporting greenstone (pounamu) to Eastern jade markets. His blasting operation in Milford Sound cost him two broken arms and the sight of one eye. Anglem’s market research seems to have been on a par with his care for industrial safety – the entire 10-ton shipment was rejected on quality grounds, and he did not pursue the trade further.

In fact, the first really significant export trade from New Zealand to China was initiated by a Chinese storekeeper, Chew Chong. In the 1870s, he began to buy and process for export edible fungus that grew on the logs in burnt-over bush (known locally as ‘Taranaki wool’). In 1885 total fungus exports reached £72,000, more than the returns from butter shipped from Taranaki that year. Chew Chong later became an influential figure in the dairy industry. I include in the book an illustration of the resourcefulness he brought to his enterprises: when a contractor thought the risk too high to continue blasting a water tunnel to Chew Chong’s dairy plant, the factory owner finished the job himself, carrying the dynamite in his trouser pocket to keep it warm.

Some of the early trade ventures take us back to the future. Trade in services, for instance, is not a new concept – in an earlier era, two New Zealand insurance companies ran active and profitable China operations for many years. The South British Insurance Company established an agency in Shanghai in 1882, and the New Zealand Insurance Company the following year. Both subsequently extended their operation to other centres, including Fuzhou, Xiamen, Shantou, and Tianjin. The two companies maintained their operations in Shanghai until the Japanese takeover in 1941, and resumed in 1945, ceasing operations only after 1950.

Although there was no official representation in China until 1973, in the 1930s expatriate New Zealand businessmen in Tianjin, Shanghai and Hong Kong were appointed honorary trade representatives. Their quasi-official status does not seem to have done them much good: the book reproduces a 1939 press account of Cecil Davis’s humiliating de-bagging by Japanese forces at the border of Tianjin’s international concession, ‘despite his protestation that he was the agent of the New Zealand Government’. Happily, New Zealand’s more recent representatives have not faced similar trials.

Trade, never great, fell away to almost nothing in the years following the declaration of the People’s Republic and the onset of the Korean War. It was not until the mid-50s that pioneer traders like Ron Howell, Vic Percival, and Leo Tattersfield began to test the water. The anthology includes part of an interview with Ron Howell, in which he recalls the first order he placed – 50 dozen tea towels (‘although the quality to a layman like me looked pretty rumpty’). Ron, who went on to deal in considerably larger quantities, played an instrumental role in the establishment of the New Zealand China Trade Association.

As a very junior official, I was part of the support team for the 1973 Trade Mission. One photograph from the mission, reproduced in the new book, shows Charles Patrick, then International Manager of the New Zealand Dairy Board, enjoying decidedly unpasteurised soft cheese in a Mongolian yurt. I chose the photograph as a reminder of a valuable lesson in far-sighted trade promotion.

When I, rather naively, asked Charles at the end of the visit whether he had made any sales, he said that he had not tried to. The market did not yet exist. What he had done was seek out the responsible people, and tell them that, while China was not yet ready to import dairy products, the time would come when it was. When that day came, the New Zealand industry would still be around, soundly based, and in a position to supply high-quality product, while some of its competitors might not. So was laid the foundation for an export trade worth more than 2.5 billion dollars to New Zealand last year.

Special Offer for China Now readers: To qualify for a 20% discount for this special book please simply go to the Victoria University Press website & add it to your cart and enter the coupon code “NZChina” (case sensitive). Postage is additional but free in New Zealand.