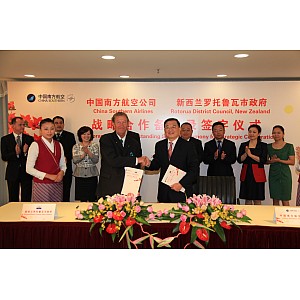 As 85 per cent of these Chinese visitors coming to Rotorua every year, China is no doubt a potential market for Rotorua to study and target. Traditionally, the majority of visitors coming to Rotorua are with the group market, but there is an increasing trend of FIT visitors and Rotorua wants to be an innovative leader in this market. The signing of the MoU with China Southern Airlines is the first step!

Over the next three years, Rotorua District Council and China Southern Airlines both will put resources together to develop mid to high-end travel markets in China under the framework of the MoU. Rotorua District Council aims to increase the value and length of stay of Chinese visitors to the region, and China Southern Airlines aims to increase passenger loadings and the profits of New Zealand – China routes and strengthen its branding in Australasia’s market.

Like any agreement signed between a Chinese company especially State Owned Enterprise (SOE) and a foreign organisation, the process of negotiation was not easy. I initiated this project and negotiated through the whole process and would like to share some key learning to opening business partnership with Chinese companies:

1.    Strategy is the direction

The unique side of each product is the most important part of any organization’s strategy, and the resource limits the focus of the strategy. In my opinion, Rotorua does have geothermal and Maori culture as unique travel experiences for visitors, but the most competitive one is the innovation in the region.

In 2012, Rotorua opened three new attraction places, an $11million investment of ‘Big Water Splash’ experience inside Rainbow Spring, a two-year R & D project leading to a world-first ‘Railcruise’ experience opened by the Prime Minister, and the only native forest zipline tour in New Zealand. These innovations and many other world-first experiences show that Rotorua is ready to provide new and diversified tourism products to FIT markets. Having been a traditional group market in China, DRM realized that maintaining the current group market but developing FIT and tailor-made markets using the limited resources is the focus of its strategy in the Chinese-speaking markets.

2.    Initiatives need to be mutually beneficial

When I first joined DRM, I talked to all the different tourism suppliers in Rotorua and found that everyone likes to engage with Chinese market but where to start is a difficult question for suppliers who have good products but non-Chinese experience. It became obvious that an initiative to work with a Chinese company which wants to bring more visitors to New Zealand is critical. Soon we identified that China Southern Airlines was a potential Chinese company to work with as it was the only Chinese airline which flew daily from China to New Zealand.

Any sustainable initiative has to be mutually beneficial. My previous contact with China Southern Airlines told me that increasing the sales of Premium Economy seats upwards and local branding are the Airlines’ prime goals. Therefore both parties started talks on how to develop mid-high end travel experience for Chinese visitors and events to promote China Southern Airlines’ images. The follow up Airlines’ team building in Rotorua increased the understanding and confidence in each other and paved the way to build an initiative which grew our profile and opportunities mutually.

3.    Communication is a ‘Western-Eastern’ team work

I think the solid support from Rotorua District Council throughout the negotiation was the best contributor to the success of this collaboration. Some New Zealand companies totally rely on its Chinese staff to do the negotiation, and some have no Chinese staff around the table, but what could be more effective might be a ‘western-eastern’ team.

Chinese staff can provide strategic advice and build the key relationship as a ‘soft touch’ for the negotiation, but Kiwi staff can make respective arrangements and firm decisions as an ‘official approach’. In Rotorua District Council, from the mayor Kevin Winters, deputy mayor Trevor Maxwell, Economic Development Director Mark Rawson, Destination Rotorua Marketing GM Oscar Nathan to myself, everyone was involved in the negotiation process at different stages, so a balance between ‘soft touch’ and ‘official approach’ can be achieved to make the communication smooth.

4.    Channel is a must-have resource

Channel equals ‘Guangxi’ also means networks in China. Without the exiting channels, no good initiative can be achieved.

Having helped the mayor of Auckland, Len Brown, during the launch of China Southern Airline’s direct service to New Zealand in 2011, I have established a relationship with the Airline’s headquarter and New Zealand office. By being a member of Len Brown’s first visit to China, my network with the Airline’s management was strengthened. This soon became a must-have resource for DRM to start and develop the negotiation. The involvement of Rotorua’s senior officials during the negotiation added more value to this project. Therefore it is worth investing time and money on building channels.

Shelley Huang is an independent consultant specialising in Strategy, Initiative, Communication and Channels to develop Chinese-speaking markets. Based in Auckland she is currently contracted to Destination Rotorua Marketing as a Business Development Manager.

Previously she worked for the Ministry of Foreign Affair & Trade during the Christchurch earthquake rescue mission, and held a senior role in New Zealand Trade and Enterprise during Shanghai World Expo 2010.

Prior to her government career, Shelley was a reporter and presenter for Asia Downunder and World TV Ltd (the Asian TV channels via Sky TV) in New Zealand. Shelley has also worked for MediaCorp in Singapore and Jiangsu provincial TV Station in China, where she was appointed as the international correspondent to report between the Israel-Lebanon war zone. In 2008, She funded and project managed the TV travel series 'China: Off the Beaten Track', broadcast through Maori Television that profiled indigenous culture in China.

We would love to share your experience helping connect Kiwi and Chinese organisations. Please contact Luke Qin at luke.qin@nzcta.co.nz