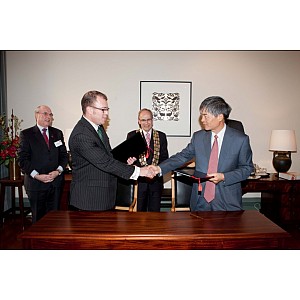 A delegation of 44 Chinese business people and local government officials visited Auckland and signed an agreement with the New Zealand business community to work together to promote and strengthen trade and investment between the countries.

Signatories to the Memorandum of Understanding* were the vice chairman of the China Council for the Promotion of International Trade (CCPIT) based in Beijing, Mr DONG Songgen, and chairman of the New Zealand China Trade Association (NZCTA), Tim White.

The signing was witnessed by the Mayor of Auckland Len Brown and a group of representatives of the Chinese and New Zealand governments, and of the Auckland Council and each business organisation.

Representing the New Zealand Government was Auckland director of the Ministry of Foreign Affairs, Warwick Hawker, and for China was the Commercial Counsellor from the Chinese Embassy Mr Hejun Wang.

Prior to the signing at the Auckland mayoral office Mr Brown and Mr Dong exchanged their personal experiences of each country and mutual hopes for future two-way trade and investment. They acknowledged Auckland’s three sister cities in China (Guangzhou, Qingdao and Ningbo) and that in this 40th anniversary of diplomatic relations between China and New Zealand, cooperation would only grow.

“The Council works closely with the NZCTA that represents New Zealand businesses very well in trade relations with China.”

He said that earlier this year he led a trade delegation of about 30 businesses to China and one valuable learning was about the business principles in building trade relations, specifically: the importance of guanxi or face-to-face contact and enjoying each other’s company for building trust, friendship and respect; that visiting China was essential to build relationships; and as a consequence of missions, the need to build a pathway for China investment into Auckland and New Zealand.

“That’s the role of the NZCTA – so trade delegations like yours can see where to invest.

“The big opportunities for China are around infrastructure investment, especially transport – rail, roading and busways.

“Already a number of Chinese banks and other investors have shown interest and we want to take that discussion further.

“Significant investment in tourism such as a planned 5-star hotel on the waterfront was also possible. Also small-medium enterprises needed investment to build their businesses.”

Mr Dong said CCPIT and NZCTA will achieve these developments. “We have paved the way for our future cooperation.”

He said delegates saw many opportunities in Auckland and New Zealand.

Mr Brown also said ideally trade missions from Auckland to China would occur regularly to keep the engagement going. Already Auckland Council was taking up some of the many invitations to conferences in China.

Earlier in the afternoon the members of the Chinese delegation were able to meet members of NZCTA for a seminar on opportunities in Auckland and New Zealand, informal networking and business matching. All parties then went to dinner.

The delegation was organized by the CCPIT and included people in a range of industry sectors including:

NZCTA and CCPIT agreed nine action points including exchanging information about the economic development of their countries to enhance trade between the two, assisting delegations to visit each other’s countries, and jointly organising CEO luncheons that will increase understanding between the countries’ CEOs and their organisations.

About the China Council for the Promotion of International Trade

Members of the China Council for the Promotion of International Trade (CCPIT) are VIPS, enterprises and organizations representing the economic and trade sectors in China. It is the most important and the largest institution for the promotion of foreign trade in China, established in 1952.

The CCPIT is also known as the China Chamber of International Commerce (CCOIC).

To achieve this mission the NZCTA:

When the New Zealand China Trade Association (NZCTA) was established in 1981 by a group of leading business people enthusiastic about the potential of trade between New Zealand and the People's Republic of China, actually doing business in China certainly had its challenges.

The Association therefore became a valuable networking organisation and was soon involved in organising trade missions to assist members with introductions and to match the inexperienced newcomers with the older China hands.

At the same time it was building a reputation in both New Zealand and China as an authoritative source of opinion for the respective Governments. It also forged relationships with influential government and business agencies in China including through Memoranda of Understanding (MOUs) with the China Council for Promotion of International Trade (CCPIT) and the China Import and Export Fair (traditionally known as The Canton Fair).

Today NZCTA’s diverse company and individual members that have an interest in China include seasoned traders and new exporters in a range of industry sectors, business associations, shipping and freight companies, financial institutions and legal firms.