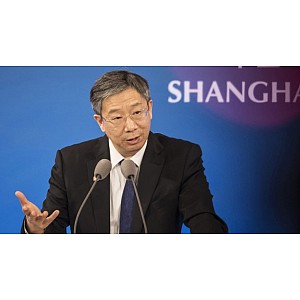 China is committed to opening up its financial services markets to foreign players irrespective of the trade war with the United States, the head of its central bank said on Sunday, countering claims it had suspended licence applications as a result of the dispute.

The People’s Bank of China (PBOC) would “implement” agreed plans for the move, governor Yi Gang told reporters on the sidelines of a forum in Beijing, which was also attended by Chinese Vice-Premier Liu He.

“Our road maps and timetables for financial opening are already very clear, and we will just implement them,” he said.

Yi was speaking at an event to mark the 20th anniversary of the China Economists 50 Forum, an independent think tank of which he and Liu are members.

His comments came amid suggestions from industry groups that because of its escalating trade war with the US Beijing had become more cautious about opening up its markets.

Jacob Parker, vice-president of China operations at the US-China Business Council (USCBC) – a group representing about 200 American companies that do business with China – was quoted by Associated Press last week as saying there had been significant delays in the issuing of licences to foreign firms in sectors such as banking, securities, insurance and asset management.

Cabinet-level Chinese officials told USCBC representatives they were putting off accepting applications “until the trajectory of the US-China relationship improves and stabilises”, he said.

Is China an open economy? Beijing says it is but IMF differs

Aside from his speech, Yi said in an article presented to the forum that China still had a long way to go to achieve a “deep and global financial market” and that there were still “gaps” to fill in its plans for opening up.

On the value of the yuan, Yi wrote that China would give the market a greater role in establishing a two-way exchange rate.

President Xi Jinping in April extended an olive branch to Wall Street and other global capitalists keen to tap into China’s lucrative financial services markets by promising to make access to them easier for foreign firms.

The offer was intended to demonstrate Beijing’s commitment to an open market policy and counterbalance any fallout from a trade war waged by US President Donald Trump.

The central bank subsequently published details of the opening up plan, under which foreign investors are now allowed to hold a majority (51 per cent maximum) stake in Chinese brokerage, futures and fund management firms. The PBOC said also that the equity ceiling in the three sectors would be removed completely within three years.

This article was originally published by the South China Morning Post