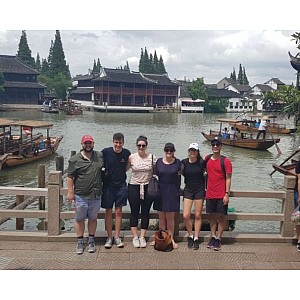 Alongside the broad cultural competency objective of our trip, we also had more focused objectives: To increase awareness of how to respond sensitively and effectively to the needs of Chinese clients and to expose young Kiwi lawyers to the opportunities that exist in Asia, beyond the typically Eurocentric career focus.

With the support of the New Zealand China Friendship Society and the Beijing People’s Association for Friendship with Foreign Countries (Beijing Youxie), the first Young Lawyers’ China Delegation began its ten-day trip to Beijing and Shanghai to learn everything we could about Chinese law and the legal system.

Down to business
Once we landed in Beijing, we were supported by the Beijing People’s Association for Friendship with Foreign Countries (Beijing Youxie).

Beijing Youxie focuses on the cultural side of professional engagements, like the exchange of writers and creatives with New Zealand and other nations, and sponsor events, conferences and festivals within China to build international relationships across different sectors. Building on our cultural introduction to China and Beijing, our afternoon meeting with the Beijing Lawyers’ Association (BLA) was a formal affair, as we were welcomed as part of a celebration of 40 years of China’s reform and opening up.

‘Casual’ conversations
With an MC moderating our discussion for tempo and content, an interpreter, and eight Beijing lawyers to pepper with questions, we learned a great deal about how Chinese lawyers define “success” (spoiler alert: as in New Zealand, it’s deeply subjective). We also discussed what typical career progression is like, the fastest evolving areas of Chinese law (IT and IP regulation), public interest litigation, and domestic impediments to alternative dispute resolution.

Developments in this area include the Multifunction Dispute Resolution Mechanism, supervised by the Beijing High Court as well as three international commercial courts planned to manage Belt and Road Initiative (BRI) disputes. The BLA also explained the mindset, expectations and needs of Chinese clients, who are increasingly focused on outbound investment. The guidance we received for foreign lawyers wishing to practice is that respect is crucial to success. Other aspects like cost reduction and fluency in Mandarin are other core components when building rapport.

At a roundtable discussion the following day, we discussed Chinese legislative procedure, the hierarchy of laws, key areas of legal reform, and the uniquely Chinese intersection between Confucianism, socialism and the rule of law with academics at the China University of Politics and Law (CUPL). We were also hosted by CEO and owner of Binglong Holdings Ltd. Jack Jiang.

Binglong does business in several sectors and supports financial education courses at universities and graduate levels. Speaking about the business activities of Binglong and the basics of how Forex trading operates in China, Jack explained that New Zealand is one of the various overseas locations in which Binglong now operates.

Culture and client service
When asked how New Zealand lawyers can better serve Chinese clients and stakeholders, Jack echoed what we learned in earlier discussions, re-enforcing that knowledge and understanding of a client’s cultural background and experience are key to good service. Further, Jack explained that he prefers advisors who stick to their opinion if they think they’re correct on a matter and don't just advise on what they think he wants to hear.

After leaving Binglong’s offices, we were treated to dinner with Jack and his team. There we had a chance to unwind and join in on the live singing at the restaurant.

Our sole engagement with a Chinese firm, Guantao Law Firm, provided fundamental insight into workplace culture, in addition to some interesting legal discussion around the development of arbitration in China, and the changing arena of overseas investment in New Zealand.

Despite the vast difference in the number of practising lawyers (Beijing alone boasts around 20,000 lawyers, compared with New Zealand’s 12,500) it was interesting to note that gender inequality issues persist notwithstanding legislative efforts to the contrary. It also became clear that competition for government and state-owned enterprise business was fierce and directly fed into the strong emphasis placed on building long-term lawyer-client relationships, beyond individual transactions.

Home abroad
The end of our stay in Beijing and at the start of the Shanghai leg consisted of visits to the swish, yet-to-be-commissioned, New Zealand Embassy building in Beijing and the recently remodeled Consulate in Shanghai. Both these visits provided a much-anticipated insight into our political and economic presence in China.

In our discussions with Ambassador Clare Fearnley and her team, we learnt that trade with China is the most politically influential part of New Zealand’s relationship with China. Forty per cent of our overall production and eighty per cent of our primary industries is exported to China each year, worth a whopping $12 billion to our economy. Our diplomats, many of whom had legal backgrounds, are posted to China to facilitate New Zealand asserting itself in an increasingly competitive international market.

Consul-General Guergana Guermanoff continued the focus on trade and the importance of sustaining a quality New Zealand brand beyond the classic ‘clean-green’ image, in a discerning Chinese market.

Overall, our visits to the Embassy and Consulate showed us the practical implications of China’s economic power, and the role our Government plays in harnessing that. Our time at the Embassy and Consulate also showed us what expatriate life in China is like; hot, hard work, fun, and jam-packed with making lasting connections. We also found time to fine-tune the tourist smiles.

Tourists
In Beijing we explored incredible sites like the Forbidden City, Tiananmen Square, the Temple of Heaven and the Summer Palace.

While in Shanghai, we spent a lot of time in the city but also had the opportunity to explore outside it.

We ventured into one of Shanghai’s water towns, Zhujiajiao. At more than 1,000 years old, the fan-shaped town is sometimes referred to as the Venice of the Orient, with its ancient water ways being the main travel routes through the town.

Final Leg
Our final week kicked off on a course of meet-and-greets based at the newly-renovated New Zealand Central in beautiful Xintiandi located in downtown Shanghai. The building's shared office space is owned by NZTE and is provided to help New Zealand organisations progress in China.

Our first lunch meeting was with Kiwi-expat Tim Jackson from international IP firm, Rouse. Tim and his team provided some interesting insights into both IP law in China, as well as life as a new-expat, living in Shanghai.

We then met Vice Chair of the newly-formed New Zealand Business Roundtable and lawyer at Shanghai Zhongwo Law, Rocky Meng. Another expat, Rocky and his associates provided some practical insights into IP enforcement in China and the role lawyers play in gathering evidence for IP enforcement, like going to markets photographing fake labels and brandings on behalf of clients – a task that we assumed would be completed by a Private Investigator. In the evening, we were invited to a networking event with other fellow Kiwi-expat lawyers, business-owners and diplomats.

During our time at New Zealand Central, we also met with representatives from New Zealand companies Zespri and Les Mills. These engagements focused predominantly on emerging issues of intellectual property within the Chinese market.

We learned that even fruit is at risk of IP fraud, and it is a hard one to enforce. Zespri stickers and labels are quite brazenly placed on non-Zespri fruit and, as fruit has a short shelf life, Zespri has to act quickly on knock-off fruit issues when they occur.

On the theme of dispute resolution, our engagements overall emphasised the growth and importance of arbitration in China, and to that end, it was fascinating to meet with representatives of both the Beijing Arbitration Centre (BAC) and Hong Kong International Arbitration Centre (HKIAC) at their respective offices in Beijing and Shanghai. Our meetings with the BAC and HKIAC gave the impression of a growing popularity and judicial acceptance of alternative dispute resolution mechanisms in China.

The BAC gave us a seminar on how it is seeking to achieve independence, competence and fairness within China’s legal and political framework. They promoted its impartiality and financial independence from the state as something that set it apart from the other 183 local arbitration commissions.

A difficulty facing the BAC is that a modern understanding of the rule of law (as understood in the West) is yet to become established in China. Concepts such as “conflict of interest” appear not to have the same force amongst Chinese lawyers (as compared to practitioners in Western jurisdictions).

At the Hong Kong International Arbitration Centre, we met with one of their representatives who facilitated a discussion between our team and nine young Chinese lawyers. HKIAC discussed in more detail the Belt and Road Initiative and its position as the pre-eminent dispute resolution centre for BRI contracts. Contrary to Mainland China, the young lawyers involved with HKIAC saw a growing demand for ad hoc arbitrations which are viewed as providing parties with more autonomy and ability to tailor their process to the needs of the specific case.

A major difficulty discussed lay in achieving an early settlement when parties are negotiating with any of China’s many state-owned enterprises. The lawyers saw fewer opportunities for settlement where the “national capital” is involved. They explained that with the loss of state money constituting an offence in China there is a perception that early (or any) settlement carries significant risk.

Overall, this trip was an eye-opening experience. Everyone returned with different highlights and lessons learned. The conversations had were a great introduction to the Chinese legal system and what’s on offer to young legal professionals in the country.

This article was published by the New Zealand Law Society.