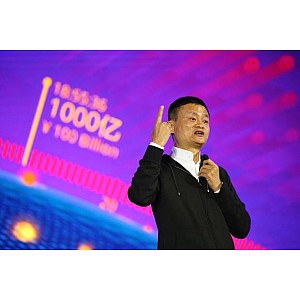 Most New Zealanders don't know it, but 11 November is China's biggest shopping day of the year.

Many Kiwi retailers do know it, however, and they are increasingly getting involved in the phenomenon that is Singles' Day. The event has become a huge success in the past few years by merging entertainment, e-commerce, smart retail technology and traditional bricks and mortar shopping.

Taking place on the 11th day of the 11th month, Singles' Day - or 11.11 as it is commonly known in China - is fast becoming a calendar fixture for many New Zealand brands.

Auckland-based e-commerce beauty retailer MYM has spent the best part of five weeks gearing up for the big day.

"We prepare well in advance. We've got to make sure all the stock we deliver, we have," says Andrew Cardy, co-founder of MYM (the name comes from "make up your mind").

The online retailer has even got in on the pre-sale action which Chinese e-commerce behemoth Alibaba - which founded the event 10 years ago - and rival JD.com make a big deal of.

"11.11, we're hoping it is going to be much larger than last year," says Cardy. "It's a big calendar event and there's a huge lead-up time with the marketing team to get everything ticked in place."

Last year, Alibaba alone generated US$25.3 billion ($38.2b) in sales during the day-long event, exceeding sales for both Black Friday and Cyber Monday in the US.

Cardy says 11.11 is commercially viable as retailers can sell off unwanted stock at discounted prices and the deals often attract new customers who buy products that are not on sale.

MYM operates out of a 230sq m distribution space in the West Auckland suburb of Avondale. It currently clocks $100,000 in sales each week, wants to hit $1 million in a single month, and is hoping this is that month, thanks to the combination of Singles' Day, Black Friday and Cyber Monday.

On the day, it will offer discounts of up to 50 per cent on fragrance, make-up and other beauty products.

Singles' Day is in its infancy here. Research from price comparison website PriceSpy shows three-quarters of Kiwis do not know what 11.11 is, despite it being the largest offline and online shopping day in the world.

Kiwi retailers and brands taking part in 11.11 are largely doing so online, though Retail NZ general manager of public affairs Greg Harford says such sales will trickle into physical stores in coming years.

New Zealand organic skincare brand Essano will make its 11.11 debut into the Chinese market tomorrow, through a flagship store on Alibaba's Tmall platform.

The brand was invited to be on the shopping site, and Essano general manager of export, Anthony Gadsdon, says it expects about 20 times its average daily sales.

It will have 25 per cent discounts on its skincare and haircare during the event.

Skincare brand Fernz is also taking part, for the third year. Cult favourites with Chinese consumers such as Linden Leaves, Trilogy, Ecostore, Antipodes, Comvita and Vogels are among the 700 or so New Zealand brands that will also be involved.

Ecostore made more than $1 million in sales on Singles' Day last year, exceeding its previous year totals in an hour and a half into the event.

The environmentally-friendly cleaning products company has shipped 30 40ft containers to China to accommodate an expected influx of sales.

Fernz skincare spokeswoman Kai Du says Singles' Day is becoming its biggest sales period of the year. To mark the occasion, it offered a buy-one-get-one-free deal on pre-sale which has already sold out.

"We set aside a limited quantity of 3000 units of the promotional offer and this year we sold out within a week."

Dairy giant Fonterra is also in on the event with a number of its brands including Anchor, Anmum and Anlene, offering limited edition gift boxes and bulk packs.

It has 2000 vintage Anchor gift boxes which Fonterra vice-president of consumer brands, Chester Cao, says it expects to sell out in within hours. The company has been a part of 11.11 for six years.

Cao says it is hard to describe the intensity of the retail phenomenon - not only on the day but also in the lead-up.

"Our e-commerce team spend months planning our campaigns and working closely with the e-commerce platforms, and there are many sleepless nights," he says. "During the 24-hour period, they sleep at the head offices of Tmall and JD.com so they can keep their fingers on the pulse – even taking turns to nap under desks."

Fonterra has partnerships with eight major Chinese e-commerce platforms, including smaller sites such as Suning and Yihaodian.

While it will be promoting its Anchor brand during 11.11, it is one of the few brands that won't be offering discounts. "We hold our prices to reflect Anchor's premium position in China and help the brand stand out," Cao says.

"For us, it's much more than just a window to sell more product than usual ... with high levels of online traffic, it's a real chance for us to reach a greater number of consumers with our brand."

On 11.11 last year, Fonterra made sales of more than $21.75m across all of its brands - an increase of 67 per cent on the previous year, and had more than 30 million consumers visiting its online stores.

Coupons and pre-sales are at the forefront of Alibaba's plans for Singles' Day this year says Australia and New Zealand managing director Maggie Zhou.

"As part of the 24-day pre-sale period, Alibaba has a number of activities such as a Treasure Hunt, where users take part in interactive games to win coupons, and couponing for red packets totally up to RMB1 billion," she says.

The coupons represent a dollar value discount which can be spent online.

"New Zealand is a high-performing market for products on Alibaba's marketplaces, particularly relative to the scale of the New Zealand market," says Zhou.

"Last year during the 11.11 global shopping festival, New Zealand was ranked 14th globally on the Tmall and Tmall Global marketplaces."

By Aimee Shaw
This article was first published on NZ Herald.