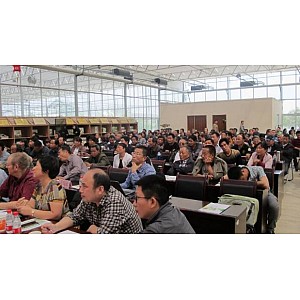 It used to be called the Chinese gooseberry; now New Zealand experts are showing Chinese growers how to create the perfect kiwifruit.

Even though China is the home of the kiwifruit, New Zealanders have honed the art of growing them and are now sharing their expertise.

It is all part of Zespri's Project Bamboo, which aims to contract selected growers to supply the Tauranga-based marketer with fruit for its expanding Chinese market.

Sales in China reached $505 million at the end of June and turnover is expected to double in four years' time.

China is the world's largest kiwifruit producer, with about 180,000 hectares planted, compared with New Zealand's 13,500 ha of orchard.

"Our team's job is to take science and knowledge and get growers to change what they do, they've been doing the same thing as their grandfathers," Zespri global production manager Shane Max says.

This is the third year of a three-year trial to determine whether Zespri can source kiwifruit in China of a similar quality to what is grown in New Zealand.

The previous two years of trials found there would be "no insurmountable barriers" to find kiwifruit which would conform to its quality standards.

Kiwi experts from Zespri and Plant and Food Research have been coming to the chief growing centres of Shaanxi and Henan for five years.

The Shaanxi Bairui Kiwifruit Research Institute is headed by the charismatic Lei Yushan, who has spent his working life researching kiwifruit, for which he is known as the "scholar of Shaanxi".

Over many years Lei has tramped into the nearby Qinling mountains to gather scores of varieties of wild kiwifruit and cultivate germplasm at the institute.

He and his staff have developed a number of commercial varieties now grown and sold on the local market. Among them are gold and red varieties.

Lei acknowledges New Zealand research and development is ahead of China's.

"Cultivar breeding is more advanced in New Zealand, management is better and soils are more fertile. Chinese soils have been cultivated for a very long time."

Max tells a story of how poor the soils are.

"There were about 100 people with me, I said I'd pay 100 yuan if anyone can find a worm. Suddenly all these spades and trowels came out and after about 15 minutes someone came up with one worm."

On a visit to a Zespri trial plot owned by the Haisheng Group, Max points out it is one of the few companies growing grass under the vines.

"It's great, it's worm food for free. Just about everywhere else, they love the rotary hoe which is the worst possible thing because it breaks the soil structure."

Some companies are now seeing the income that can be earned by making compost, and growers are starting to apply it.

Max says orchards are typically at the same level of sophistication of a New Zealand orchard of 20 years ago. Growers plant at higher densities and focus on a high volume of fruit rather than fewer fruit of higher quality.

The climate has thrown up challenges, from "horrendous winds" which sweep across the plains several times a year and destroy fruit, to a lack of rain which could be a sign of climate change.

Usually it is dry in winter and spring but summer rains bring relief to the parched soils; last year though there was no rain at all in July.

Work is continuing to fully gauge the acceptability to Chinese consumers of Chinese-grown Zespri kiwifruit. From a food safety point of view, the fruit passes muster.

"There are no problems with heavy metals or E coli, which were concerns the Zespri board has raised.

"We also test for agrichemical residues which has given us a really good sense of what the residues used in China are, and we've found nothing you wouldn't eat," Max says.

Zespri and Plant and Food Research experts have held regular symposiums to pass on tips to growers, from which people had to be turned away, so great is the demand.

"Their attitude and their technique really has impressed me a lot. Zespri's involvement is helping us to lift our production."

Max says the reward for his efforts goes beyond what it might mean for Zespri.

"It's nice to feel that you're helping really poor people," he says.