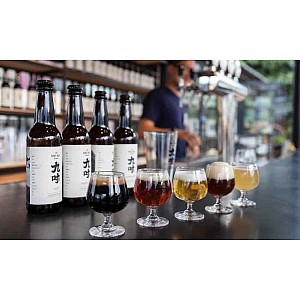 From the alleyways of Běijīng to the Tibetan highlands, independent brewing is on the rise in the world’s most populous nation.

When we think of China, chances are we don’t think of craft beer. You might put that down to the legacy of popular beers like Tsingtao, Harbin or Snow. Tsingtao, of the seaside city Qingdao, is marketed as being brewed with mineral water from the Láoshān Mountains. Buy a bottle and you may pause to wonder whether they added anything else.

Thankfully, craft beer came to China in about 2008, championed by Shànghăi’s Boxing Cat Brewery, and found its way to the hútongs (narrow alleyways) of Běijīng in 2010.

Most people will tell you the father of Běijīng craft beer is Great Leap Brewing’s Carl Setzer. It’s not a title he’s super comfortable with, but regardless, he’s the guy flying the flag for independent, quality-over-everything craft beer.

Setzer, originally from Cleveland, set up shop in Dòujiǎo Hútong with his wife and business partner, Shāndōng native Liu Fang. Their goal was to brew beer that honoured China’s rich culinary tradition.

Setzer’s a character. His blog canvasses every industry issue he’s encountered, from copycat culture to corporate hackery. His posts: Five Things That Will Happen in Chinese Craft Beer in 2018 and Why Do I Care? give an idea of his style of advocacy. He’s also the founding member of the Chinese Craft Beer Association, which promotes independent brewing and ensures Chinese consumers understand what it means to be craft.

Great Leap has an impressive range of beer in familiar styles, but it’s set apart by its use of Chinese flavours and ingredients. Setzer’s Honey Ma Gold uses Sìchuān pepper, and his Iron Buddha Blonde, Hidden General IPA and Silver Needle White Ale are all successful experiments with tea.

His Liu the Brave series, currently comprising a Chai Masala stout and a Mocha Stout, was brewed in honour of his father-in-law Liu Yong. Its logo — a picture of Yong shadow boxing — was a surprise for his wife after all her family photos were destroyed in a house fire.

Sitting in the leafy shade at Great Leap’s Hútong #6 in Běijīng, my tasting tray looked like a round bought for friends who hadn’t turned up. The Honey Ma Gold was my favourite. It was slightly sweet, with a hint of Sìchuān pepper’s characteristic sourness. I couldn’t detect the numbing qualities that make the pepper so famous, but by the time I’d finished the tray I was there anyway.

I’d later sober up enough to ask Setzer a few questions. At first glance it seemed that his industry was dominated by expat American brewers – not just Setzer himself, but guys like Daniel Hebert and Chandler Jurinka from Slow Boat Brewery. But Setzer said that while that might have been true four years ago, now the vast majority of the more than 200 Chinese craft breweries currently in business belong to Chinese citizens.

The industry may be experiencing an upswing, but a lot of Setzer’s own commentary suggests the future of independent Chinese craft beer is uncertain.

“Many people are claiming that China is in the middle of a craft beer revolution, but China is still very much in the infant stages of craft beer development. Currently, the way things are going in China seem to be echoing what happened to American craft beer in the mid-90s, with brands opening to just try to make a quick buck instead of focusing on making quality beer.”

Despite these misgivings, Setzer’s philosophy remains straightforward: “Just make sure you give a shit and make good beer. Regardless of the size of the market, people will always thirst for a quality product they know was made by people who care.”

While Běijīng still wears the craft capital crown, some newcomers are heading to the greener pastures of Yúnnán Province, in China’s southwest. The province is the home of pǔ’ěr tea and is famous for its mushrooms, wildflowers and lush mountain scenery.

There by chance I met Liu Xinzheng and Ma Junli from Nine Inch Brewing. Lost in a rabbit warren of alleys east of Dali's ancient town, their bar appeared like a mirage in the middle of an empty lot.

The angular glass building is the centrepiece of a not-yet-open art district. Confused but hopeful, I sat down at the unattended bar, and before long Xinzheng, flustered and apologetic, came racing through the lot with a plate of fresh cherries. The only business open, he was well ahead of schedule and while he had nothing on tap yet, I was able to try his beer by the bottle.

Xinzheng told me his grandfather worked at a Běijīng brewery, so from a young age he’s had a taste for beer. He studied fermentation at university in Húběi province where he met Junli, a freelance writer. The pair started out brewing in Běijīng, but decided to move south to take advantage of Yúnnán’s quality ingredients and comfortable weather.

As we chatted, I tried a biscuity red ale and a saison brewed with New Zealand-grown Nelson sauvin hops. Xinzheng told me he wants to experiment with various styles and hops from different regions, but was drawn to New Zealand hops for their balanced bitter and fruit aromas.

His sweet milk stout and bitter, coffee-ish black lager are already selling well, but I’m convinced it’s his bone-dry, slightly sparkling mead that will be the money-maker. Despite being out of my price range at around $NZ45, Xinzheng opened a bottle on the house. It seemed to be his proudest achievement and I was more than glad to toast his hard work.

Nine Inch Brewing isn’t exporting yet — but their northern neighbours, the team at Shangri-La Highland Craft Brewery, are.

Sitting 3,300m above sea level on Yúnnán’s portion of the Tibetan Plateau, Shangri-La is home to some of China’s cleanest air and water. At that altitude, one Shangri-La Tibetan Pale Ale (a reasonable 5.4%) warms you up nicely.

Shangri-La Beer founder Songtsen (Sonny) Gyalzur is a Tibetan, but born and raised in Switzerland. His mother and father were Tea Horse Road traders running caravans between Tibet and India who were forced to seek a new home when unable to return to China during the Cultural Revolution.

In 2008, Gyalzur’s mum convinced him to return to Shangri-La to help her run an orphanage. There he saw first-hand the hardship caused by persistent unemployment. He resolved to set up a business that would support local people and make use of the Tibetan highland barley that remains the area’s staple food source. Today, 80% of Shangri-La Beer’s staff are the young people who were raised at the orphanage, including both the brewmaster assistant and its head of production.

In Shangri-La, sitting at the bar of my aptly named hostel Tavern 47 and armed with a yak burger, I made my way through each of Sonny’s six beers with total disregard for tasting notes. They were delicious.

When I arrived in China, I thought drinking was the preserve of old men crowded around card tables clutching glasses of báijiǔ — a white spirit reminiscent of paint-thinner. Well, Setzer, Xinzheng and Gyalzur are seeing to that. Gānbēi.

Sarah Austen-Smith is a Wellington Beltway escapee. She’s travelling through China and Central Asia this year following the Silk Road from Shangri-la to Samarkand.
This article was first published by THE SPINOFF.