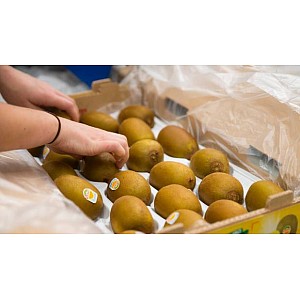 Chinese government officials have intercepted 120 trays of fake Zespri kiwifruit being sold in a fruit market.

Zespri worked with Chinese government officials to identify and prosecute where possible, she said.

"The recent interception of 120 trays of counterfeit product in the Zhoungpu Wholesale Fruit Market is a great example of this partnership in action and we appreciate the support of China authorities in taking immediate action," Brown said.

Overseas reports said the counterfeited product trays were branded as "Zeopri" but the fruit itself was branded with Zespri labels. The logo on the box also closely resembled the Zespri logo.

Brown said Zespri sold about $500 million of kiwifruit in mainland China last season and China was now on par with Japan as its largest market.

The New Zealand company was on track to sell more than 25 million trays of Zespri kiwifruit in China this season, an increase of about 20 per cent on last season, she said.

"Zespri uses a number of technologies to protect our brand and manage traceability."

"If we told people what the technologies were, then they could try and figure out how to beat them so we keep it all on the down-low," Lynch said.

Zespri is not the first New Zealand company to be imitated in China.

In 2015 a fake Moa Brewing Company bar popped up in southeastern China.

A Chinese court ordered two defendants, one in Guangzhou and the other in Suzhou, to sign personal undertakings that meant they could be face prison terms if they reoffended.

By John Anthony
This article was first published by Stuff.