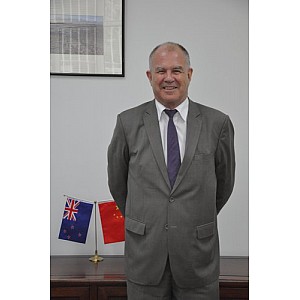 Talking about New Zealand, the first thing that comes to mind for Chinese is milk powder and the ethnic group Maori. However, there is more to it than that.

The current New Zealand Ambassador to China John McKinnon is a direct witness of the growing bilateral ties. The Global Times (GT) interviewed him, and he shared his opinion on the future connections between the two countries.

GT: This year is the 45th anniversary of diplomatic relations between China and New Zealand. What are the contributors of the significance of the relations?

McKinnon:  Looking back over the past 45 years, there are three places where we can see big changes in bilateral relations.

The first and also the most important is that there has been a continuous sequence of good relations between the New Zealand leaders and the Chinese leaders.

The second is the trade and economic relations, which is the biggest change in the past 45 years. In 1972 there was very little trade between China and New Zealand and following that, China has become more and more significant. When I was in China between 2001 and 2004, China was the fourth and fifth largest economic partner and now is the first or second, depending on what you calculate and what is happening in Australia. Much is because of the growth of the Chinese economy. New Zealand has benefited from the tastes and demands of the Chinese consumers.

The third area is people-to-people contact. In 1972, there were limited interactions between New Zealanders and Chinese. Whilst now, it's very different partly due to the fact that there are quite a variety of cultural events, sporting exchanges and other ways that connect the two people.

GT: What is your perspective for the upgrade of the Free Trade Agreement (FTA) between the two countries?

The world economy in 2017 is not the same as in 2008, so we try to think of ways to upgrade the agreement to modernize it and to make it reflect areas of activity that did not exist in 2008 such as e-commerce and to look at any areas of particular concerns that either side might have. For New Zealand, that's dairy products.

We have had two rounds of negotiations and there will probably be a third round taking place in the latter part of this year.

GT: A recent survey for students in grades 12 and 13 in New Zealand suggested that 60 percent of them are not ready to get along with Asians and one-third of them are not interested in studying the Asian language. When the connection between Asia, especially China, and New Zealand is increasing, these statistics show the opposite. What is your view?

McKinnon: I was very interested in that because my previous job was executive director of Asia New Zealand Foundation, which is the organization that operates this survey. The foundation has been doing this annually since 1997, and part of that value is that it allows you to track changes over time. The reason the survey is undertaken is that the government has recognized that New Zealand needs to connect with Asia. Also, over the long run, the trend line has been positive in terms of New Zealand's attitude toward Asia, Asians and learning about Asia, but this fluctuates in different ways.

In New Zealand, there are two languages that are growing in popularity - Chinese and Spanish. But the process of encouraging people to learn Chinese is quite a complicated one. New Zealand does not have a compulsory language in the school curriculum. So what happens in school is a reflection of what parents or teachers want, but also is related to the availability of teachers. I think part of the reason the foundation continues to push this is that this is something it has to keep working at.

GT: What would be the most potential new developing sectors in bilateral trade in the future?

McKinnon: I could think of a number of areas. One is the environment. There is an increasing focus on environmental growth and that generates a whole set of questions because you have to thinking of the effect of your economic growth on your environment. That is the area, in terms of technology, management and consultancy, where there is much interaction between China and New Zealand.

The second is the creative industry. The companies that did many of the figures for the Lord of the Rings (2001) - such as the digitalized images - are based in New Zealand and they have done much work in China. If I was rolling ahead ten years, I would say that the film industry would be an area where there will be more contact and activities happening.

The third one has more to do with the Chinese side - the development of e-commerce. Much of what New Zealand produces is often targeted directly at Chinese consumers. So the growth of e-commerce is an area where you may end up with more things going both ways between China and New Zealand.