<< The rise of vertical, social, e-commerce platforms in China Doing business in China - about relationships and subtleties >> 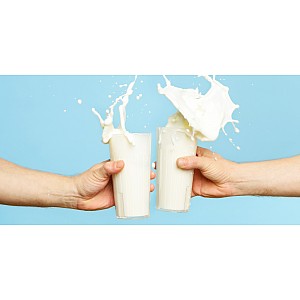 Initiated by Milk New Zealand, ‘The First Milk Taste Competition’ was held in Canterbury to demonstrate to Chinese consumers that there is variability in the taste, smell and colour of milk.

Milk New Zealand is one of the largest dairy farm groups in New Zealand with 29 farms milking 30,000 cows on 12,000 ha, producing around 10m KgMS each year. The milk production from four of the company’s farms is processed by Miraka producing Theland UHT products which are exported to China.

“There is no better way to demonstrate this than through film, so we filmed various aspects of production at our North Island farms, before recording the Milk Taste Competition which was held at Purata’s Delaborin Dairies in Hororata and which coincided with our end of year function. The eventual programme will screen online, on shopping channels and instore television screens in China.

“The Milk Taste Competition involved six members of the Purata team blind-tasting full cream milk. The team graded the milk according to taste, colour and smell and not surprisingly the milk with the highest protein and fat content, was the most popular.

“The event was attended by the Purata farm team and their families and a number of awards were presented including Milk Taste Master and Highest Protein. The day’s programme also included a variety of team and family orientated competitions with prizes ranging from a weekend get-away to Queenstown to $200 and $100 gift cards for such things as innovation, best team work, best family work and cutest calf - won by calf number seven, Ritchie McCalf.”

Justine Kidd said the Milk Taste Competition, and the resulting footage, will put a very positive spotlight on the quality and integrity behind the production of Theland UHT milk and on New Zealand dairying in general.

“Involving our farm team in the event also provided them with a wider perspective of the business they are part of. They now have a clearer sense of the connection between what they do on farm, and the end consumer. We have a highly motivated, stable team of very skilled people on our farms and milk production is on or ahead of budget.”

In recognition of the Purata farm team’s dedication, the Managing Director of Milk New Zealand, Terry Lee, presented each person with a crystal seal symbolising the company’s commitment to them – their acceptance a symbol of their willingness to be a part of the business’s success into the future.

<< Commentary  < The rise of vertical, social, e-commerce platforms in China | Doing business in China - about relationships and subtleties >