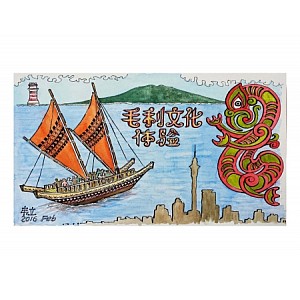 Chinese executives will be sent out on a waka as part of a new course about Māori approaches to leadership and business.

The pathbreaking “Māori /Chinese Culture Management Course – Wayfinding Leadership” promises to equip Chinese executives to engage with Māori businesspeople. It will cover Māori business styles and values, entrepreneurship and interconnections between Māori and Chinese values. Participants will learn about the “wayfinding” approach to leadership, based on principles of traditional waka ocean navigation.

Associate Professor Chellie Spiller at the University of Auckland Business School, who helped develop the wayfinding model, created the course in collaboration with Jolene Zhou, director of consultancy New Zealand China Business. It evolved from ideas sparked five years ago, when the Business School brought Māori and Chinese business leaders together to discuss growth and partnership opportunities between the two economies.

Dr Spiller says several large Chinese companies with investments in New Zealand have already expressed an interest in the programme.

At the official launch on 16th November, co-hosted by ATEED and NZ China Business, Dr Spiller said the course would encourage a dialogue about similarities and differences in Māori and Chinese ways of doing business.

“We’ll be asking, what can Chinese bring for Māori, and what can Māori bring for Chinese? How can we strengthen and learn from each other?”

Some of the common cultural values that played out in business were a pursuit of group wellbeing over individual, an emphasis on relationships and trust-building as a foundation for doing business, and a long-term, multi-generational outlook.

Dr Spiller noted direct parallels between Māori and Chinese values such as mana (personal or group reputation; authority) and lian and mianzi (“face”, society's confidence in personal or business' integrity; marks of personal pride, basis of personal reputation and social status); whanaungatanga and iwitanga (kinship bonds, expression and celebration of cultural qualities) and guanxi (network of relations and connections promoting trust and co-operation).

They talked about genetic, historical and economic ties between Chinese and Māori. The Māori preference to lease rather than sell land-based assets was touched on by several speakers as one area of potential misunderstanding and conflict.

Sir Pita recounted a recent business trip to China shortly after national media there ran headlines about Māori opposition to the Crafar farms sale to Shanghai Pengxin. When his group met with a Chinese banker to discuss a potential investment, the banker asked, “Why should we deal with you, you fight Chinese investors in New Zealand?”

Sir Pita: “We explained for Māori the land, the earth is your mother, the climate, the sky is your father; and we asked the question would you sell your mother? And they understood, and we did business.

“The most important thing in trade is to show respect to the person you’re trading with, and to show it with naturalness and honest affection."

Dr Henare said Māori had always been enterprising and outward-looking. “Māori like to grow things, develop things, and then we have a history of moving on to a different part of the world to start again. Māori going global today is Māori doing what we’ve done always. New Zealand as a market has grown too small for us, so we’re looking to fresh fields.”

Currently worth $42.6b, the Māori economy is 60 percent export-focussed and growing at a faster rate than the wider New Zealand economy.

Chen Jing endorsed the programme, saying Māori were significant to China in terms of economic and social development, and in strengthening New Zealand-China relations.

The programme will run next year at the Business School’s Graduate School of Management, one night a month for six months, with Dr Spiller as lead facilitator.