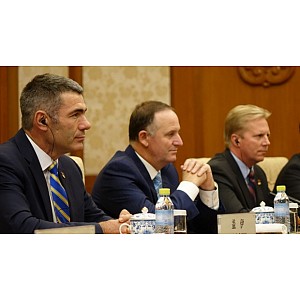 The Ministry for Primary Industries and the China Certification and Accreditation Administration co-signed a new Halal Arrangement in Beijing, under which China will recognise New Zealand’s halal regulation and certification regime for halal goods exported to China.

“This is a major step forward for New Zealand’s halal meat producers, and it marks the first time China has recognised another county’s halal regulatory and certification systems,” says Mr Guy.

“The arrangement will provide a competitive advantage in China for our red meat producers.”

“The AGP aims to foster stronger relationships between New Zealand and China’s agricultural sectors through coordinated, strategic cooperation. This is a public-private partnership that aims to utilise NZ Inc expertise in research and training to work on co-operation activities in areas such as agricultural policy exchange, dairy farmer training, livestock technology, animal health and disease control. These signings reinforce the strong and positive relationship we have between the two countries, and are the result of a lot of hard work on both sides.”