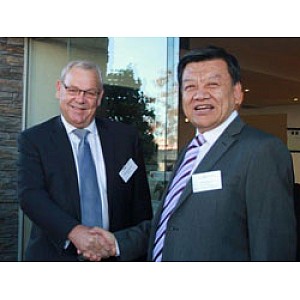 Marlborough Mayor and the leader of a delegation from China’s Ningxia District signed a memorandum of understanding on 20th April which paves the way for a relationship between the largest wine growing regions of each country.

The six-member delegation was led by the vice secretary of the Ningxia People’s Congress Mr Wang Ru’gui and accompanied by a member of the Chinese Consulate in Christchurch.
Mr Sowman met his Chinese guests for a working breakfast, later signing an agreement to build a relationship between the two regions.

“We hope this will be the beginning of a practical working relationship between two regions where winegrowing is central to the local economy,” said Mr Sowman.

The delegation also spent time with the leadership of Marlborough secondary schools and tertiary education institution, discussing opportunities for Ningxia students to study in Marlborough under a programme focussed on the science of the wine industry.

This year's vintage was drawing to a close in Marlborough but the delegation was shown a winery in full production at Riverlands industrial park on the edge of Blenheim, after lunch at Marlborough’s Brancott Estate which looks out at the area of the region’s first sauvignon blanc plantings.

The Marlborough Mayor said some Marlborough-based wine industry figures are already spending extended periods in Ningxia and there have been some initial sales of oenology equipment by Marlborough businesses.

“Ningxia makes red wine, not sauvignon blanc, but there is opportunity for sharing of technology and expertise and Marlborough is very pleased to be able to build close links with China’s winegrowing region at the very beginning of what will undoubtedly be a large industry in future,” said Mr Sowman.
New Zealand wine exports to China are also growing quickly, currently worth $27M a year.

Other major Marlborough exports were also the subject of discussion, including forestry and aquaculture. Marlborough green shell mussels have been finding a market in China with exports growing by almost 15% last year.