China's "One Belt, One Road" Initiative 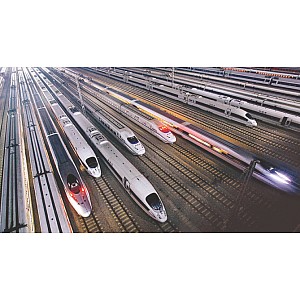 With a decade of unprecedented economic growth, China is now entering a new era of economic, social and political development, impacted by its new position as the world’s second largest economy, with a booming middle class population but crippling environmental concerns. China is now focusing more on the quality of their growth rather than growth ‘at any cost’. Out of the plethora of new Plans, Strategies and Visions created by Chinese government agencies, the “Vision and Actions on Jointly Building the Silk Road Economic Belt and the 21st Century Maritime Silk Road” or more simply known as the “One Belt, One Road Initiative” epitomises China’s new approach to foreign policy. The Initiative is an extension of China’s ‘go out’ and ‘go west’ policies and represents a move by the Government to be more targeted, strategic and focused in its future development.

The Initiative aims to consolidate and upgrade existing infrastructure and build new transport routes to improve cross-border trade. It also includes efforts to promote a greater financial integration of the Renminbi with foreign countries and create a “Digital Silk Road” of international communication and information distribution. The “Silk Road Economic Belt” connects China via land with Central Asia, Russia, Europe and Southeast Asia. The “21st Century Maritime Silk Road” makes a link from the Indian Ocean, through the South China Sea to the South Pacific Ocean (see map). Geographically positioned in the middle of both the Belt and the Road, China has emerged as the facilitator in developing a connection between Europe and Asia.

All roads lead to China

Similar to the Roman Empire’s network of roads, rail and ports, The Initiative has given major priority to infrastructure. Plans are already in place to build railway networks, port facilities, airports, highways and electronic communication networks to guarantee smoother and more efficient transportation of goods and people, from Southeast Asia to Western Europe. The Asian Development Bank, managed by Japan and independent of The Initiative, has estimated that in order to support the expected volume of international trade produced from The Initiative, Asian countries must invest US$8 trillion to bring their facilities up to world standards. China has already conducted feasibility studies on four international high-speed railways – the Europe-Asia, Central Asia, Pan-Asia and China-Russia-America-Canada high-speed rail lines. Poland also recently signed an MOU with China which includes railway projects linking China’s city of Chengdu with the Polish city of Lodz, as well as linking Suzhou, in Jiangsu Province, with Warsaw. Supporting these infrastructure developments, China has opened up discussions to open new ‘free trade zones’ and ‘trade co-operation zones’. Currently, there are 77 economic and trade co-operation zones in 23 countries along the Belt and Road including within Russia, Hungary, Romania, Laos, Thailand and Indonesia.

To support these major plans, China has been actively promoting the establishment of the Asian Infrastructure Investment Bank (AIIB), The BRICS New Development Bank and the Silk Road Fund. The US$100 billion AIIB attracted global controversy in early 2015 when the US publically criticised the Bank and typical allies like the UK and Australia who ‘broke ranks’ and joined the Bank. The creation of the AIIB represents one of the first steps of The Initiative. 57 nations, including Australia, Brazil, Germany and Russia have signed up. Still in its development phase, it is maybe too early to assess whether or not the Bank will operate effectively. What has been noted is that it represents a shift in Chinese diplomacy from typically acting independently and unilaterally to being more collaborative and regionally-focused.

Besides forming the basis of China’s new foreign policy, Xi Jinping has also made The Initiative a key domestic economic strategy. Under the plan, China plans to develop various key regions in China – the inland regions, north-western and north-eastern regions, south-western region and coastal regions. In the north-western region, the Initiative has appointed Xinjiang province as a key area on the Belt as it shares its borders with Mongolia, Russia, Kazakhstan, Kyrgyzstan, Tajikistan, Afghanistan and Pakistan. Rail links are also expected to improve transportation between Heilongjiang province and neighbouring Russia. In the south-west, Guangxi and Yunnan provinces will play key roles in opening up the Greater Mekong sub-region. Ports in China’s coastal cities such as Ningbo-Zhoushan, Fuzhou, Xiamen and Shenzhen will be further developed to facilitate increasing volumes of maritime trade.

Most importantly, the Initiative has made specific plans to establish Chongqing as the key to opening up and growing China’s western region (‘go west’ policy). This will be supported by developing Chengdu, Xian and Zhengzhou to open up the inland areas and act as a key region for railway transportation to Europe. The cities themselves are also making their own plans for the Initiative – more than two-thirds of the 28 mainland provinces have already done so. For example, Chongqing has published their own plans to implement The Initiative and has pledged to invest RMB1.2 trillion in infrastructure before 2020.These policies reflect China’s seriousness in continuing and further enhancing its ‘go west’ policy, a cornerstone of the 12thFive Year Plan. By improving connectivity between China’s poorer western regions with the wealthy eastern coast, The Initiative hopes to spur more regionally focused growth, contributing to China’s overall aim of sustainable and balanced economic growth.

Despite Beijing’s attempts to stress the ‘win-win’ potential of The Initiative, many countries are deeply concerned about its geopolitical impacts. Key regional players such as Japan, Russia and India are particularly anxious about the increasing levels of Chinese influence in their respective regions. In addition, The Initiative runs the risk of being too ‘China-centric’ with the other participating nations only reaping marginal benefits. It is therefore imperative that China recognises these concerns, remains transparent in their plans and communicates regularly with all parties.

Motivations aside, The Initiative and the development of its supplementary Asian Infrastructure Investment Bank demonstrate an enormous potential to enhance economic growth and sustainable development not only throughout Asia but within China itself. Another major indication of China’s influence, both regionally and globally, as we advance deeper into the Asian Century.