New Zealand and China in 2014: from relationship to partnership 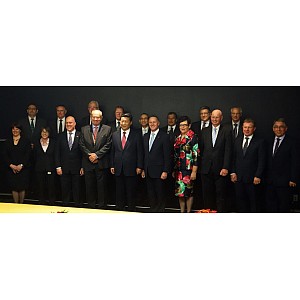 On Friday 21 November, the New Zealand China Council Executive met with President Xi Jinping and his senior delegation in Auckland.  Council Chairman Sir Don McKinnon introduced the Executive members to the President, who was accompanied by Prime Minister John Key.

The meeting was an opportunity for Council members to engage personally with the President.  It also capped off an extraordinary year in the New Zealand China relationship, in which the Council continued to lead and advocate across public and private sector efforts.

Xi Jinping’s visit is one of the most significant that New Zealand will get for some time.  The relationship strengthened greatly as a result, with both countries agreeing to designate the relationship a Comprehensive Strategic Partnership.

But what does this mean in practice?  Simply put, it lifts cooperation between New Zealand and China across the board and into many new areas, and replaces the strategic relationship that has been in place since 2003.

It means proceeding with the stated goal of increasing two way trade to $30b by 2020, and keeping the Free Trade Agreement relevant and up to date.  For New Zealand, diversification and adding value will be key to hitting that target.

We can look forward to greater cooperation in agriculture (including two way investment), recognising the pivotal role this sector plays in bilateral trade and economic linkages.

People flows between New Zealand and China are also set to increase, partly as a result of expanded cooperation in education, tourism, culture, sports, broadcasting, and television.

Other sectors specifically mentioned in terms of deeper cooperation include science and technology, defence, climate change, crime and legal matters, and disaster prevention.

Numerous individual initiatives were announced during the visit, from the establishment of a China Cultural Centre in New Zealand to funding for new film co-productions and sister school relationships.  All of these are exciting and reflect a mature and growing partnership.

Finally, a comprehensive strategic partnership means closer communication and coordination in major international and regional affairs.  We both share the goal of freer trade between the economies of Asia Pacific, and will strengthen our work in mechanisms such as APEC and ASEAN, and work toward our common interests in the Pacific.

The New Zealand China Council looks forward to building on the successful visit by President Xi Jinping.  Through our priority work programme we are committed to lifting New Zealand’s economic performance, growing the capability of our companies who do business with China, influencing leadership positively in both countries, and building a greater understanding of Chinese language and culture.

The evolution of our relationship to one of comprehensive strategic partnership supports this work, and points to a future of greater opportunity and prosperity for New Zealanders and Chinese alike.